General Stephen Draper -
-6.8k
Path of Exile Shaping Before you start shaping your Path of Exile Atlas, we suggest you read our introduction to the Atlas. Once you have...
Home of all the good stuff. (Image via PGL.)

We’re all going to be talking about 7.00 and the Boston Major for weeks, so here’s a quick look back at five of the best things in Dota from this past week:

Congrats to OG for their Boston Major victory

2. We had a Grand Finals match that rivaled TI3 in terms of hype:

I’ll admit, I had concerns about how DC would continue to perform after TI6. Dota teams rise and fall from power pretty quickly these days. But DC is still proving that they deserve to be on par with “institutional powerhouses” like EG.

Despite having a rocky year in 2016, Virtus.Pro has gone back to kicking ass and taking names. They have the heavy burden of representing CIS Dota during its darkest hours. They absolutely dominated OG at The Summit 6 in a quick 3-0 at the grand finals. They were knocked out by EG at the Boston Major but remain formidable opponents.

Ad Finem, a team that were surprise qualifiers for the Major, are this year’s runners up. They represent Greece. They might have come in second place, but they’ve gained a ton of new fans after their stellar performance in Boston.

Damn, it’s so exciting to see a new pack of teams in the top slots at tournaments I’m super excited to see N0tail the flower get a three-peat, but ggwp to Ad Finem! I hope to see much more of them.

4. 7.00 is here, and it’s wilder than anyone could have ever expected.

You’ll be reading about this for weeks to come. Icefrog in his infinite wisdom has fundamentally altered Dota. Talent trees? Shrines? Additional item slots? And that’s just the tip of the iceberg. I always tell myself I won’t use this phrase but I CAN’T EVEN YOU GUYS I JUST CAN’T RIGHT NOW.

5. POCKET RIKI was actually implemented into the game. 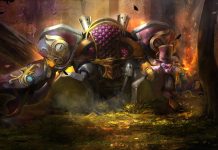