“GG EZ MID” is the oldest excuse for losing you’ll ever hear, but there’s no doubt that dominating the mid lane is the fastest way to put your team in a game winning position. The mid laner is traditionally the player who will give your side some much needed impetus going into the mid game, and if your mid laner has been shut down then you’re going to struggle to win those early team fights. Take these tips on board if you want to consistently win mid.

It’s hard to overstate how important your starting items are. Tangos or Healing Salve? Or just a couple of Faerie Fires? Ironwood Branches? Or should I get a Null Talisman? Do I need a Magic Wand this game? Learn to choose your starting items depending on which hero you’re playing and which mid you’re playing against. Generally speaking, Salves are best for aggressive heroes, who can use the healing boost to find a first blood–for a good exmaple, check out the clip above to see SumaiL doing this with Queen of Pain. If you’re bringing Tangos or want to build a Magic Wand, then bringing Ironwood Branches to lane will synergize well. Otherwise, Null Talisman for Intelligence heroes and a Wraith Band for Agility heroes will give you some last hitting power early in the lane and can easily be built into Veils or Rings of Aquila.

You can’t always last pick your hero, but it’s still handy to have several mids prepared so that you’re more likely to find a favorable match-up. If you’re concerned that the enemy side are going to pressure you hard with roaming supports, then make sure you choose a hero with a strong escape mechanism. When you do come across a difficult match-up learn how to deal with it – whether this means rotating to the jungle to find some farm or simply ganking hard once you’ve got a few levels. And remember to level up your abilities according to the match-up. There’s no point taking additional of levels in Poison Dagger as a Queen of Pain if you’re up against a Puck who can easily dodge them with Phase Shift.

Communicate With Your Team

If you’re struggling in mid, let your teammates know right away. Once they’ve secured farm for the carry they should be able to come and gank, or at least create some space for you to catch up. Similarly, if you’re unable to counter-gank because your TP Scroll is on cooldown then let them know, because they might be counting on your help if they get dived. Tell them “I’m going to take the mid tower and then come to gank” or “my ulti is ready, can you bait them?” This kind of information is going to help your team play accordingly, instead of assuming they know what you want them to do.

Controlling creep aggro is everything in the mid lane. It’s crucial to get the best creep block possible in order to secure those early last hits, but by clicking on the enemy hero and triggering creep aggro you can draw the creeps towards you and off the enemy high-ground. You can also reset the aggro for both creeps and towers by Force Attack clicking on one of your creeps, which can be used to keep your hero from taking too much when harassing or diving the enemy mid.

Previous articlePAX East 2017 Preview: Get Ready to Game
Next articleAmateur Tournaments: How to Grow an Industry 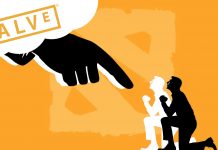