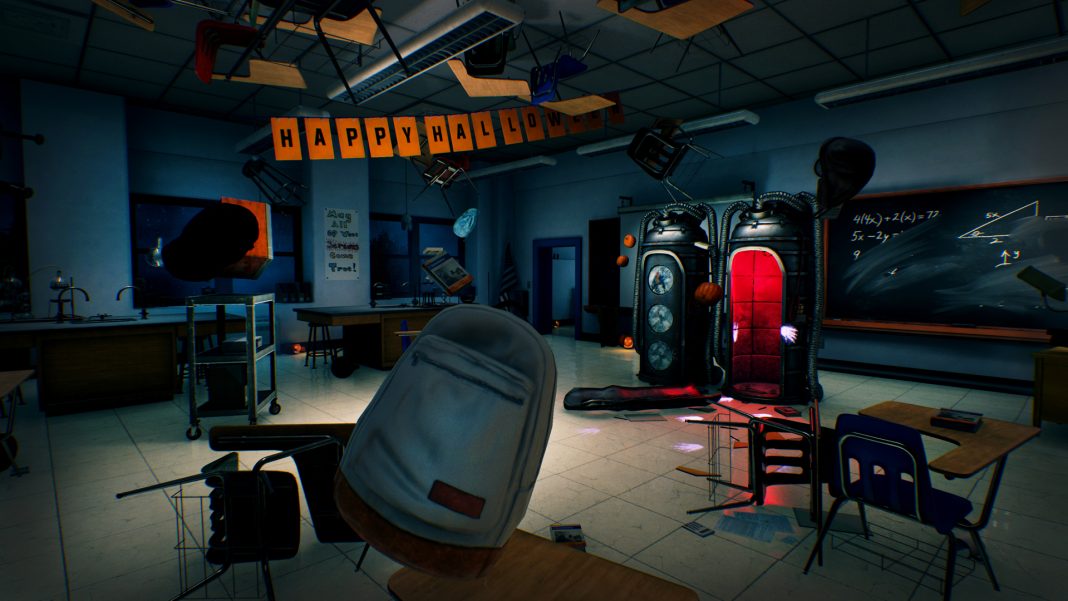 Your Steam library is full of indie games that you’ve collected over the years. Through a mixture of Humble Bundles, sales, and drunken late night shopping sprees, you’ve acquired a vast army of games that you’re lucky to have played more than an hour or two of. (Hatoful Boyfriend was an impulse purchase I’ll never regret, and remains the best pigeon dating sim I’ve ever played.)

See, Hide and Shriek might be in your library right now. You might’ve bought it during the Halloween Sale. But please don’t let it wither and die in your backlog of games. It deserves a better fate than Osmos.

Here’s how Hide and Shriek works: you and a friend lobby up for a game, and each of you spawn in front of your respective altars – you’re either red or blue – in one of four high school classrooms. Your goal? To grab as many of your colored orbs as you can, and drop them off at your altar.

Each time you deposit an orb, you net yourself a nice 10,000 points and your altar disappears and moves to another room.

Sounds simple, right? Hold on to your butts.

There are different runes scattered around the map. Each rune lets you cast a different spell – in one example, the spell lets you shoot a fireball at your opponent. When you pick up multiple runes, however, you can combine them and cast new spells – through these rune combinations, you can place wormholes on floors, booby-trap doors, and do all kinds of dickish things to your “friend.”

Oh, and you’re invisible. Did I not mention that? Yeah. You can’t see your opponent, but you can see what they’re doing if you happen to be in the same place at the same time. See a floating orb making a beeline towards an altar? That’s your opponent.

Now, even though you can’t see your opponent, once your “Shriek” meter gets past a certain threshold, you’re able to “shoot” them with a scream. You’re going to have to get really fucking lucky, though, because remember, they’re invisible, and even if they’re carrying a floating orb that screams “hey shoot me, I’m a disembodied orb collector,” you’re probably going to miss.

Games last ten minutes, or until one person has frightened the other to death by landing multiple successful shrieks. (I’m shit at the game, so I got frightened to death a lot.)

Here’s the real secret to making a good multiplayer game, at least for indie developers: minimizing the number of times people feel like it’s “bullshit” when they die or lose. Some titles that require a high level of in-game knowledge to be played well (DotA, for example) are exempt from this, but as a general rule, people don’t like getting bullshitted by a game. It feels bad to lose to mechanics you don’t understand. While it was fun to play Hide and Shriek with someone who had also just picked up the game (thanks for scaring me, Phischer), my experience was nowhere near as enjoyable when I queued into a random stranger, who seemed to have an almost supernatural (hah) grip of the game mechanics and I spent the majority of my time getting absolutely shat on by perfectly executed combinations of traps. It wasn’t awful or rage-inducing, but I’d be lying if I said it was necessarily a fun experience.

Now, these kinds of soul-crushing losses are to be considered par for the course when it comes to the world’s most popular competitive online titles – sometimes your opponents in League, Dota, or Counter-Strike will shut you out and you’ll have absolutely no idea what went wrong other than everything. But for an indie game like Hide and Shriek, playing against someone with far more experience was confusing and disheartening, as I suppose I was expecting a far more casual experience. I felt like I was getting bullshitted, partially because I didn’t understand what was going on – I’m sure my opponent wasn’t just getting lucky, but those kinds of gut reactions to gameplay are worth noting.

All in all, Hide and Shriek passes the real test for an indie game: I wanted to play it again, and I wanted to show it to other people. My one piece of advice? Don’t play it unless you’re giving it a shot with some friends. The game doesn’t hold up nearly as well when you’re up against strangers, although there’s a surprising amount of depth to be found in the game. (No, it shouldn’t be an esport. Please, god, no.) I give it a solid 8/10, and for just under $6, you’re getting your money’s worth.

Esports Edition was provided with a copy of Hide and Shriek by the developer. As with all of our game and hardware reviews, our opinions are our own. Check out our Ethics Policy for more information.

Previous articleGwent Review (Beta): A Blessing to the TCG Genre
Next articleStreamline Review: A Party With Potential 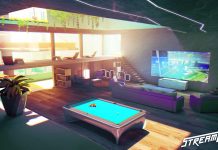