The first match of Day 2 Worlds 2016 pitted North American veterans Cloud9 against the Korean overlords SK Telecom T1; the resulting match hardly lived up to the hype. SKT took the win in a 34 minute game that they dominated from start to finish, capturing the first meeting between C9’s Jung “Impact” Eon-yeong and his former teammates.

“Once the game started, I focused in a bit more”, said Lee “Faker” Sang-hyeok in his post-game interview; his calmness was definitely reflected in a solo kill against Jensen midway through the game, removing any doubts of rust on the “Unkillable Demon King“. With Bae “bengi” Seong-ung backing him up throughout the early game, SKT looks like the early favorites to win Group B.

In their loss, the one bright spot for Cloud9 was solid play from both their top lane and jungle. William “Meteos” Hartman looked particularly sharp on his Lee Sin, an uplifting sign for C9 who has traditionally relied on his creativity in international play. The pick/ban phase though left much to be desired, drafting a team-fighting composition that inherently lacked crowd control.

Coach9 Reapered is going to have a challenge on his hands if he wants to sharpen up the North American 3rd seed from the looks of it. 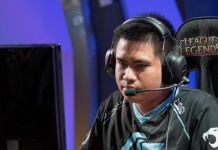