Dota 2 Eugene Torubalko -
-441
What to Expect for the Spring 2021 Dota Plus Update Dota Plus is a premium monthly subscription service in Dota 2. It comes with many...
Rammus has made it back into competitive play... by accident.

Apparently Chae “Piglet” Gwang-jin’s homesickness is getting the better of him; after seeing fellow Korean competitors CJ’s Park “Shy” Sang-myeon and Kim “Ssumday” Chan-ho pick Teemo in the LCK by accident, Piglet just couldn’t stop himself from replicating the incidents. He made sure to add his hint of originality though, locking in Rammus support instead of Teemo top. I could think of few picks that would be more useless in that role. For now, no other team has replicated Piglet’s mistake in North America, which essentially indicates that the North American Challenger Series players are performing at a higher level than those from the LCK.

Even worse though, the Rammus selection came in the final game of a best-of-5 for the NACS Summer Finals. After putting up a resilient fight against Cloud9 Challenger, Team Liquid Academy squandered away its opportunity to pull off the upset against the Challenger imposters. William “Stunt” Chen, who was forced onto the Rammus pick displayed some evidence inexperience with the champion’s diverse mechanics, misusing his flash-taunt on a key C9C towerdive; however, his mindset and effort was definitely inspiring. Overall, his performance could be most aptly described as ok.

Following the incident, TLA jungler Galen “Moon” Holgate on Twitter cited section 8.8.5 of the challenger ruleset, which allows for a player to re-do “an erroneously-selected champion pick or ban” with the following caveats:

J.T. “Riot Tiza” Vandenbree was quick to reply, determining that the rule does not apply in this case since time expired as normal. Due to the nature of the tournament realm client, a random selection was automatically made. Further, teams would otherwise be able to use this rule as a timeout excuse.

This accident serves, once again, as a reminder to the most comical region internationally that teams can’t just copy Korean strategies to win. More importantly, you should never imitate the losing ones. 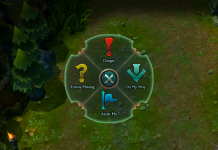 BunnyFufuu to Step Down from Role as C9 Support

ROC Steelback Continues to Be Stuck in ELO Hell