Dota 2 Craig Linscott -
-996
Silencer Here is a Hero that can silence entire stadiums of screaming fans. A fun trend that is going around in the larger LAN tournaments...
Teemo's managed to find his way into professional League of Legends, but not intentionally. Art by Tim Von Rueden

It turns out that professional Korean League of Legends players are more similar to us than many would think, particularly in the trolling trait. On back to back days, LCK top laners have managed to accidentally select Teemo in champion select, essentially throwing games before they even start.

The two culprits, CJ’s Park “Shy” Sang-myeon and KT’s Kim “Ssumday” Chan-ho are no rookies to the LCK. These seasoned veterans made the mistake of deciding to hover over Teemo during their pick. As the timer ticked down, neither of them were able to switch onto a legitimate champion in time. While part of this may be due to League’s poorly coded and slow performing client or lack of mechanical skill, ultimately the onus lies on the players/teams themselves. It is absolutely crucial to make a pick decision within the allotted time; champion select should be one of the best prepared areas of a team’s pregame.

CJ ended up falling 2-0 at the hands of Longzhu, in large part due to the uselessness of Shy’s Teemo. Not only was he unable to effectively team fight due to the nature of the champion, but his split-pushing pressure was almost nonexistent.

Ssumday had a slightly stronger showing, even achieving a ‘flame horizon‘ over his opposing top laner at one point in the game. The hybrid attack speed build featuring a Frozen Mallet and Nashor’s Tooth with a Hextech Gunblade finisher had its moments. In particular, a fight initiated at KT’s inhibitor began with a pick by Ssumday using the Gunblade active onto the enemy Jhin. KT would ultimately take the series 2-1. However, the sacrificed game from the Teemo pick had some serious implications since they needed a clean sweep in order to claim a tie-breaker in the LCK standings.

What Did We Learn?

Plain and simply said: don’t hover useless champions. Even though players may want to hide their cards until the last second, it simply isn’t worth the risk of picking Teemo. While hovering a Teemo or Urgot pick may be slightly comical, the possible repercussions of getting stuck with it are far too great, especially at the competitive level.

Even showing no champion at all in pro play is a safer bet. If a pick is missed, all that is taken away is a ban, instead of being forced to proceed. Fortunately for LCK fans, it looks like there was no accidental Teemo hover into lock in subsequent matches. These events serve as a friendly reminder to think quickly and always have a backup plan. 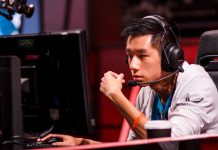 Why Is Everyone Picking Rek’Sai?