Roughly a year ago Hearthstone was commonly referred to as Shamanstone. Shaman was so strong that the two decks from this class were rated first and second in terms of power, and most tier lists added an additional tier at the top just for Shaman, because it was so much better than other decks. Now, however, Shaman is at the very bottom of the tier list. Coming up with a list of decks to call the “best” was a challenge, but we’ve managed to find a few that have made it to Legend.

So venture forth tentatively, because these decks will not be the best of the best. But, if you love Shaman, and you are willing to take on a challenge, these are the decks for you!

We’re starting off the list with the only Shaman deck that has consistently made it onto tier lists. It’s not the best, by any means, but it’s there, and showing up is half the battle. This deck revolves around making use of low cost minions, and evolving them into stronger minions. It excels at filling the board quickly, then making it explode with large minions out of nowhere, so it needs to have a lot of low mana cards that provide value. That’s where cards like Firefly, Primalfin Totem, Saronite Chain Gaing, and Bloodsail Raider into Patches come in. All of them provide multiple minions from a single card, which allows for bigger Evolve plays.

Later in the game you can set off the real powerhouse of the deck: Dopplegangsters. Dopplegangster plus Evolve creates three six-mana minions for two cards and six mana. It is very rare that your opponent will be able to deal with this without committing a lot of resources. If you get even later into the game, you can potentially get off the true powerhouse of this deck: Dopplegangsters into Thrall, Deathseer. If you can do that, you can play a two card combo for ten mana that creates three seven-mana minions. Not only that, but it has the potential to turn one of them into an eight-mana minion on the next turn.

Thrall, Deathseer really brings out the potential in this deck. Being able to Evolve every turn increases your board strength, and allows you to make favorable trades easily. You left your 5/5 minion at one health? Evolved, it becomes stronger and returns to full health. Sure, Evolve always has the potential to backfire, but it also has the potential to make powerful cards as well.

This deck was created by Reddit user itsonfosho, who piloted it to Legend. It has a similar shell to the Evolve variant, but instead of curving out into larger minions to Evolve, it just goes pure aggression. It has more Pirates for more offense, and uses the old staple Flamewreathed Faceless. The deck ends off with Lava Burst, Jade Lightning, and Lightning Bolt to burst your opponent down. In many ways this pilots the same as a Tempo Mage deck. Curve out by filling the board and going aggressive, then finish the game with burst damage.

The obvious issue with this deck is that it has a weaker board than Aggro Paladin or Aggro Druid. Instead of having buffs for its small minions, it has damage spells as finishers. This means this variant has to go much more aggressive, because every point of damage is incredibly relevant. Jade Claws is likely the strongest card in the deck, so you always keep it off the mulligan.

The deck creator is aware that Mana Tide Totem is underwhelming. He suggests replacing it with Bloodmage Thalnos, and potentially a Hammer of Twilight. If you’re having issues, try those two as replacements, as they fit the deck well. Remember, this deck will perform similarly to Aggro Paladin and Aggro Druid, so you have your work cut out for you. This deck is for the niche Shaman lovers.

This is easily my favourite deck on our list, and is very reminiscent of the Control Shaman from last year. This deck was created by player Appa on HearthstoneTopDecks. It is based around clearing the board, healing yourself, and playing for late game. Once you get there you can drop cards like Earth Elemental, Thing from Below, and Snowfury Giant. The real synergy in this deck comes from Lesser Sapphire Spellstone. If you can get it up to three copies, then play a zero mana Snowfury Giant or Thing from Below and copy it, you’re set. Four 8/8s for two cards and seven mana? Scary.

But no amount of 8/8s will stand up against certain board clears. This leads us to the real goal of the deck (if you can pull it off). White Eyes isn’t as intimidating as Snowfury Giant, but his friends are. When White Eyes dies, you shuffle The Storm Guardian into your deck. The Storm Guardian is a five mana 10/10 with Taunt. Pretty strong, right? Even better, because we’re going to copy White Eyes as many times as possible. The advantage here is that clearing him only helps your deck. White Eyes and Sapphire Spellstone together are twelve mana, so instead, you combo White Eyes and Zola the Gorgon, to create two copies of him. The dream is that one of them stays in play for a Sapphire Spellstone. But, even if they don’t, now you have two 10/10 Taunt minions in your deck.

This deck definitely struggles against aggressive decks. It’s very high cost, and all your clear spells Overload you. But, if you can get to turn five or six, this deck really takes off. This one is another labor of love. Personally, I have a soft spot for Control Shaman, so this is the deck I’ll be rocking for the next few weeks. Hopefully you give Shaman a chance, too, even if he is on the bench for now. 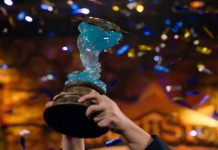