League of Legends Stephen Draper -
-416
Nexus Blitz has been a mode showcased several times now within League of Legends. It’s entirely different from the main game, and in it's...
Image via EsportsEdition.

It’s no secret that Shaman is the most played class right now. And by right now, I mean it has been for the past year. People call it Shamanstone for a reason. Aggressive decks are the bane of most player’s Hearthstone life, currently. The top three archetypes on ladder are Aggro Shaman, Midrange Jade Shaman, and Pirate Warrior. Those three archetypes alone make up 36% of the entire ladder, going by this week’s Vicious Syndicate report. Shaman itself makes up 28.88% of ladder, which only gets larger as you go up in ranks, maxing at 38.85% between ranks 1 and 5.

But Vicious Syndicate, an organization that produces reports about the Hearthstone meta,  have called out a different class as troublesome and ‘anti-fun.’ Not Shaman, not Warrior, but… Jade Druid. Let’s take a look at the issue. 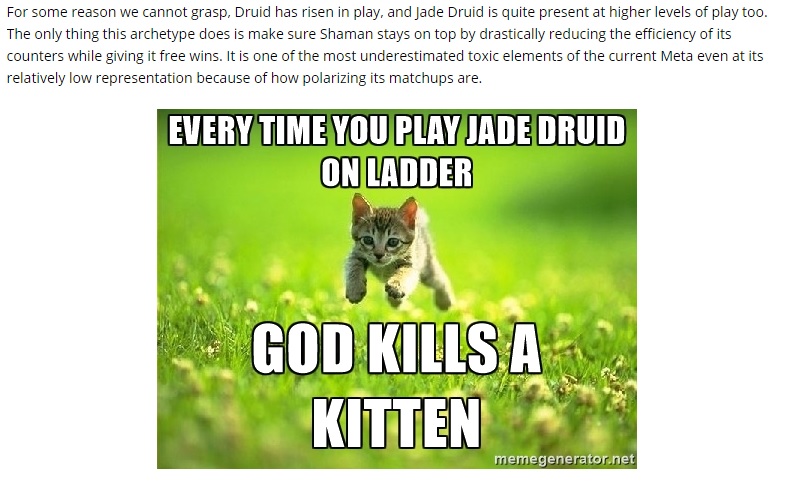 This is a fascinating statement. While aggro may be a bit too strong right now, Vicious Syndicate argue that the real issue is the snowballing decks. Jade Druid is an extremely strong, largely overpowered deck in longer games. It has an extremely high win rate against nearly all other control decks. In fact, the only reason it isn’t great is the fact that it is weak to aggro.

Countering the meta can be a huge part of climbing the ladder. If the meta is aggro, play Reno Mage or Control Warrior. When the meta is Reno, play Jade Druid. When the meta is Jade Druid, play aggro. Every little win percentage helps, and if you can pick off another popular deck consistently, you should. The problem currently is that the meta is dominated by aggro decks. Nearly 50% of ladder is aggro. So the best way to counter it is to play Reno Mage, right? Reno Mage has a good win rate against aggro, in general.

The problem is that now people are picking up Jade Druid again, which, in turn, absolutely destroys Reno Mage but also loses horribly to aggro. This pushes the Reno Mage’s win rate down, and aggro’s win rate up. The Jade player themselves won’t have a particularly high win rate either. What Jade Druid decks do is reinforce the meta.

Vicious Syndicate commented within the Reddit post about how important this is. They said that the win rate of Reno Mage is currently 3.5% lower than Aggro Shaman. However, a full 3% of that difference is caused by Jade Druid’s farming Reno Mages. If Jade Druid didn’t exist, Reno Mage’s win rate would be 3% higher. This would make it competitive for the highest win rate in the game, and diversify the meta significantly. Unfortunately, it cannot happen because of the polarized matchup between Jade Druid and Reno Mage.

The largest issue is that aggro will consistently beat Jade Druid, and Jade Druid stomps control. There is very little skill involved in either matchup. Jade Druid beats Reno Mage a full 71% of the time. It also loses to Aggro Shaman 66% of the time. These are very polarizing numbers, and it enters the realm of decks playing themselves. A meta can’t be healthy when you can auto-win certain matchups, and auto-lose others. Aggro needs a nerf. Badly. But when it gets it, suddenly Jade Druid is going to be crazily overpowered. Blizzard seriously needs to address this before we enter another season of Druid dominance. 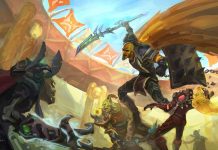