Hearthstone‘s upcoming expansion, Whispers of the Elder Gods, features the ancient terrors from the beyond that were introduced to the world through the writings of H.P. Lovecraft. In the Warcraft universe, they feature as powerful entities, who corrupt the Earth Aspect Neltharion into becoming the powerful Deathwing. The four named Elder Gods to feature in the Warcraft Universe are C’thun, Yogg-Saron, N’Zoth, and Y’Shaarj, and they have been confirmed to be legendary cards in Whispers. Each has terrible power, but thus far, with the help of powerful allies, the players of World of Warcraft have taken down three of the horrible beasts.

C’thun is an Old God that created the qiraji and resides within the city of Ahn’Qiraj in Silithus. He appears in World of Warcraft as the final encounter in the Temple of Ahn’Qiraj. C’thun is most likely derived from the most commonly known being of the Lovecraft works: Cthulhu. A being that inspires pure insanity and chaos and who is a truly formidable foe. The Warcraft version of this Elder Being is different from the Lovecraftian, with its appearance being closer to that of the Eye of Sauron than that of the giant hybrid alien Cthulhu. His actions seem closer to those of Yog-Sothoth, who is the gatekeeper of the Elder Beings.

Known as The Lucid Dream, The Beast with a Thousand Maws, The Fiend of a Thousand Faces, The God of Death, That Which Must Not Be Named, Yogg-Saron made appearances in World of Warcraft as the final boss in the raid dungeon Ulduar. Yogg-Saron was responsible for the creation of the Curse of Flesh in the early days of Azeroth. When the Titans waged war against the Old Gods and shattered their citadels, they found that the infestation had grown so severe that destroying the Old Gods would also lead to the annihilation of Azeroth, which led to their imprisonment deep beneath the world. Yogg-Saron’s name is derived from Yog-Sothoth from H.P. Lovecraft’s Cthulhu Mythos. His titles are references to Shub-Niggurath, who is refered to as “The Black Goat of the Woods with a Thousand Young” and to whom Yogg-Saron bears a resemblance.

Speculated to be deep under the sea in Azeroth, N’Zoth has rarely been spoken of throughout the world. However the creature has been noted in writings and is responsible for the creation of the Naga through the corruption of the Highborne Night Elves. N’Zoth is likely the one who is truly responsible for the Emerald Nightmare and was probably also the Old God that drove Neltharion to the brink of insanity. While no concrete evidence exists to tie N’Zoth to a particular Lovecraftian figure, one of the phrases uttered by loot he drops is “In the sunken city, he lays dreaming”, which may be a reference to the lost city of R’lyeh referred to in the Cthulhu mythos, which is the prison of Cthulhu, priest of the Elder Beings. Thus, N’Zoth may have a more similar role to the actual Cthulhu then C’thun. In addition, N’Zoth is the only one of the four listed beings to not have been thwarted by the players of World of Warcraft.

Located in what is now Pandaria, the mantidrace worshiped his seven heads. The Titans slew Y’shaarj, but with his dying breath he cursed Pandaria by infesting it with “shadows of his former self”.The mantid seem to believe Y’Shaarj may return someday, and if so, they will ally themselves with him. Garrosh Hellscream played host to Y’Shaarj after using his heart to control the True Horde. Based off the “black goat with seven eyes” quote of his loot drop, it is possible Y’shaarj is also a reference to H.P Lovecraft’s Shub-Niggurath, who was known as “The Black Goat of the Woods with a Thousand Young”. However it is not completely certain if the goat is in fact Y’shaarj.

These Elder Gods will soon invade Hearthstone. Are you prepared? 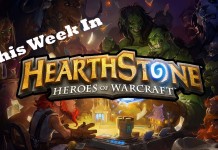