Galakrond Warlock is not new, but is instead a time-proven deck in the Descent of Dragons meta. This is a complex control archetype that does not show impressive statistics, but can easily compete with other decks if managed right.

Galakrond Warlock plays well against Rogues, Druids, Priests, and even Paladins. The hardest match-ups for it are Warriors and Hunters. In this guide you will find the top deck lists, how to mulligan, and how to play this deck in general.

Players have build the optimal Galakrond Warlock deck a long time ago. It includes a Sacrificial Pact, as well as Zephrys the Great and Dragonqueen Alexstrasza, despite the second copies of the cards in the deck.

Instead of Fiendish Rites, you can put Bad Luck Albatross or Chaos Gazer, although the latter is not as suitable for the current meta.

The deck is expensive, but you can’t make it much cheaper. On a budget, some of the legendaries can be replaced by Twisting Nether, Khartut Defender, Twilight Dragon, or Mountain Giant.

Cards with invoke should be kept in your opening hand. Always keep Dragonblight Cultist and Devoted Maniac, and with a good hand or Coin, keep Shield of Galakrond. If you are playing against an aggressive deck, keep Nether Breath and Dark Skies. Against slow opponents or with a good hand, keep Galakrond, the Wretched. If you are running a copy of Bad Luck Albatross, keep it in slow matchups as well.

Galakrond Warlock is a slow deck, despite the aggressive strength of Galakrond, the Wretched. Use 1/1 Demons to help fight for board presence, and utilize Plague of Flames for as much value as possible.

You are able to draw through your deck very quickly, and most of the deck’s strategy is built around this. Even after losing your ability to Life Tap, you will still have Veiled Worshipper, two copies of which will give you 6 additional cards. That way you can quickly find your key threats and activate the battlecries of Zephrys the Great and Dragonqueen Alexstrasza.

The goal of the Warlock Galakrond is to sort out the deck as soon as possible, get important minions into the hand, play them early and crush the opponent. This is the best-case scenario, implemented only in the slowest match-ups. But Warlock can easily play from defense. Numerous AoE spells, Taunts and healing cards help with that. In the latest deck lists, there are plenty of such cards. Examples are Zilliax, Nether Breath, Sacrificial Pact, and many other options. Zephrys the Great can also be part of this list, although usually it is used for other purposes.

In agro match-ups, key cards are Dark Skies, Plague of Flames, and Crazed Netherwing. The latter is especially strong because it does not just clean the opponent’s board, but also creates a presence on yours.

Do not try to strengthen Galakrond to the last stage if you do not have the necessary cards. In aggressive match-ups, it is important to create a presence on the board as soon as possible, rather than waiting for complex combinations. In the worst-case scenarios, feel free to play Galakrond even in the first form.

Do not be afraid to use Life Tap, even if your opponent has a lot of damage. It is much more important to find the key board cleaning cards, taunts, and healing in the early game – they are the only way you can win. If you don’t get cards and key tools, you lose. Health is important, but the cards are more important.

In slow matchups, it is important to create pressure and force the opponent to look for answers. Therefore, you can play minions on curve without any benefits from their effects if it is not particularly important in the match-up. In slow matchups, Crazed Netherwing will be almost useless and rarely clean the board, so you can play it on curve as a 5/5 threat. Losing the dragon effect in the control match-up is not that bad – the presence is more important.

Explosive damage cards will also help you play aggressively. Now Warlock has Nether Breath that hits your opponent’s face quite hard, as well as the Kronx Dragonhoof, which can deal 5 more damage to the enemy or buff minor threats by + 2 / + 2.

Keep an eye on the cards in the deck to know for sure whether duplicate cards are left there. If your deck only contains one copy of each card, Dragonqueen Alexstrasza and Zephrys the Great will indicate this while in your hand.

Use your AoE wisely: you have two Plague of Flames, Lord Godfrey, Crazed Netherwing, Dark Skies, Kronx Dragonhoof, as well as a Brawl or Twisting Nether from Zephrys the Great. It is important to understand when and which AoE to use: knowledge of the opponent’s deck will help.

In most matchups, the Sacrificial Pact is used on allied 1/1 demons, which are summoned by the ability of the Galakrond, the Wretched. But sometimes demons will be on the opponent’s board – do not miss them.

Try to play Kronx Dragonhoof after Galakrond, the Wretched. You have a lot of draw, so finding Galakrond is not so difficult without using Kronx.

There are only 4 copies of dragons in the deck, so try to use effects of the Nether Breath and Crazed Netherwing in time. Most often, their activators will be such expensive cards as Alexstrasza and Dragonqueen Alexstrasza.

Dragonqueen Alexstrasza can give any dragon in the game, including other classes. The only card you can’t get is Queen Alexstrasza herself. Among random dragons, there are taunts, as well as threats with other useful effects that can help you to come back.

Zephrys the Great is a flexible and versatile card. You are interested in AoE effects, as well as explosive damage cards like Savage Roar and Bloodlust. With the latter one, you can often end the game unexpectedly.

Keep on that grind, learn from your mistakes, and master this deck to push your way into legend!

Previous articleBeginners guide for Hearthstone Battlegrounds
Next articleWild Format: The First Echoes of Descent of Dragons 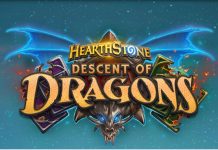