Teamwork is sometimes hard to come by in the world of DotA 2. Corralling five players into one cohesive mass to win is not always possible. However, it should always be attempted, as this is usually the only way the game can be won. Yet, before we can get to getting a team of five working together we need to learn how to work together in lane. Mid-lane is an altogether different matter as you will most likely be alone, although each of these proposed combos will be sure to grant you the win in your lane. Starting from the easiest to hardest to play we will go through two lane combos that should give you an edge so that you can at least learn to play well with one other teammate.

Ogre and Silencer are two fairly straightforward heroes. Each hero has a slow ability, Ogre’s Ignite will slow an enemy by 20% for 5 seconds at level 1 whereas Silencers Arcane Curse will add another 9% for 6 seconds. These two spells combine to make the enemy hero unable to move around easily in lane, all the while taking damage from these abilities and the attacks of Silencer and Ogre.
For this lane there are a few things to keep in mind. First, that Ogre should be on the front line of the fight, although Ogre should be wary if they are against an Ursa as his fury swipes can add up rather fast. Second, this lane is not a burst damage lane, it is a wear the enemy down and press your advantage. This lane will force the enemy to courier out many salves and clarities to keep their health and mana pool up. All the while you should be able to be farming fairly easily in the lane.

If the lane requires some burst damage then Ignite and Last Word can be leveled up, however, these spells should usually be only have one level in early on to gain the stun and silence given from the abilities. Maxing Arcane Curse with Ignite and Glaives of Wisdom with Bloodlust makes this combo very fearsome. They are able to stay away from most enemy heroes and their damage all the while dealing out a vicious amount of damage with Bloodlust and Glaives.
This lane is relatively straight forward. Cast Arcane Curse and Ignite and hope the enemy hero decides to use their abilities which will re-cast arcane curse on them. Chase the enemy down and kill them. +2 Intelligence for the Silencer and -2 for the enemy.

A counter to this lane combo is a strong laner that punishes these two heroes for dealing damage over time. Viper is a strong contender, along with Undying. Although I still put my money on Silencer/Ogre.

This laning combo is slightly more difficult and to be fair almost any hero that can initiate easily can be combined with Grimstroke to pull this off, Spirit Breaker is just my favourite. Perhaps the most difficult aspect of this combo is timing. To get this combo off the Spirit Breaker needs to initiate the charge and have the Grimstroke be near enough to Ink Swell three seconds or less of the charge hitting.
The key component is that Spirit Breaker is standing beside the enemy hero that needs to die while Ink Swell’s timer of 3 seconds runs out. If this is the case then huzzah! Spirit Breaker also gains a movement speed bonus from Ink Swell causing his bash to deal more damage as Great Bash’s damage is linked to Spirit Breakers movement speed.

The second most difficult aspect of this combo is to not level up Grimstroke’s Stroke of Fate. The key component alongside Ink Swell and Greater Bash is

Phantom’s Embrace. A spell that causes the enemy to be silenced, and if they do not attack and destroy the Phantom they are dealt a rather large amount of damage and Grimstroke can instantly cast Phantom’s Embrace again.
While the enemy is stunned from the charge, then InkSwell, then perhaps another bash, it is unlikely they will be able to kill the Phantom, allowing Grimstroke to cast it twice on each attempt – that is unless the enemy hero is already dead. This combo can be very devastating in the laning phase as well as roaming around the map looking for kills.
What this combo does not do, is win games. You will dominate your lane, destroy most likely whoever you are up against. What you will find is that your combo begins to slow down as the team groups together. While still good, it cannot dominate 5 heroes.

Heroes that counter this lane combo are heroes that can purge off InkSwell. Omniknight is a good candidate so long as he can get repel off before Phantom hits him. If this happens then he will be immune from Phantom and Inkswell, allowing him to walk away easily.

Side note on Grimstroke.

This hero is probably the true Over Powered of the DOTA 2 world right now. He combos up with almost every hero in the game to pull this off and dominate his lane. Any hero, and I mean that, any hero that can help the InkSwell candidate getting close to the enemy hero is viable with Grimstroke. Grimstroke/Monkey King, good; Grimstroke/Void, good; Grimstoke/Phantom Assassin, good; Grimstroke/Phoenix, sure, Grimstroke/pudge, meepo, naga, Pango, Oracle, Leshrac, Lich, Natures Prophet, Sven, Tide, Bristleback, ChaosKnight, Slark… I think you understand the idea. Please just remember: timing, and don’t skill that Stroke of Fate.

While Stroke of Fate is fantastic for nuking down creeps, you do not want to be doing that as it is your carries role to get those last hits. Focus on helping or getting the kills for carry in lane, and remember in the end…

Previous articleDominance Shown in the Dota 2 Pro Circuit so far in 2019
Next articleThe Good, the Bad, and the Ugly in Dota 2 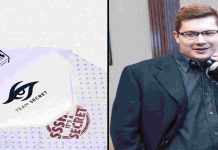