General Stephen Draper -
-6.8k
Path of Exile Shaping Before you start shaping your Path of Exile Atlas, we suggest you read our introduction to the Atlas. Once you have...
Featured image via HLTV.org.

On his social media accounts, Mikail “Maikelele” Bill has announced the formation of his new team. The players currently confirmed to be on the roster are:

It looks like the team is still unsigned and looking for an organization to pick them up, but in the mean time they are being called eZaF. Obviously a play on the fact that all of the current members are former FaZe Clan teammates who have since been removed. With only three players confirmed, the last two players have not yet been officially confirmed.

Back in 2015, Maikelele and fox were members of the original international lineup of Team Kinguin. This lineup was eventually bought out by Gamers2 which became G2 Esports. It was on G2 where jkaem joined the lineup to replace Adil “ScreaM” Benrlitom who was sold over to Titan.

In January of 2016, G2 was acquired by FaZe Clan. In the following months, the three members of eZaF would all be removed. Maikelele was the first to go, as he was benched for Fabien “kioShiMa” Fiey in April 2016. In August fox would be benched and pass the AWP to Aleksi “allu” Jalli.

When FaZe brought in Finn “karrigan” Andersen to in-game lead, kioShiMa was benched. However, jkaem was in a very bad slump and was soon bench to bring kioShiMa back.

Formation of the Free Agents

Although he was benched, Maikelele remained contracted to FaZe until September. He filled in for an injured Jacob “pyth” Mourujärvi on Ninjas in Pyjamas for a few months. He then went on to form the Swedish lineup of qwerty. After attending just one event, qwerty disbanded making Maikelele available to try and form this eZaF lineup.

fox was under contract with FaZe until October, and then acted as the stand-in for SK Gaming after the benching of Lincoln “fnx” Lau. He attended a few events with SK, but after the ELEAGUE major SK announced João “felps” Vasconcellos as fnx’s permanent replacement. While on SK, fox performed better than most expected so his stock has risen slightly from where it was after his benching on FaZe.

FaZe benched jkaem after the group stage of ELEAGUE season 2 due to his poor play. He left the team in December, allowing him to join this lineup now.

It is expected that Ruben “RUBINO” Villarroel will be the fourth member of eZaF. It has been reported that Philip “aizy” Aistrup will leave FaZe and replace RUBINO on North. That means RUBINO would be available to join his fellow Norwegian, jkaem over on eZaF.

This leaves one roster spot still unknown. While many fans are calling for ScreaM to join them to create a Kinguin 2.0, it seems unlikely. It has already been reported that ScreaM will take aizy’s spot on FaZe and has already been practicing with the team.

With the French Shuffle already announced and those lineups set, it is unlikely any of those players would be available. Chris “chrisJ” de Jong was recently benched on mousesports, and he is an English speaker. He could be a fit for this international lineup assuming he could get out of his Mouz contract.

Another option would be for Maikelele to look back to the last two lineups he played with for a player to fill the final slot. The other Swedes who played on qwerty should be available. Also, Maikelele and jkaem played together on a lineup called ElChapo and tried to qualify for DreamHack Masters Las Vegas. They could also grab up one of those players as well. 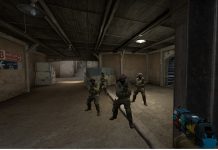