We’re almost ready for the Dota Pro Circuit (DPC) season to start, with the first tournament of the season starting on October 29. Before you tune in to the DreamLeague Season 10, let’s catch up on everything that’s happened in the Dota 2 community.

The Newest Sponsors to Enter the Scene

Earlier this month Gillette became the newest major non-endemic sponsor to join the Dota 2 scene. They launched their first new marketing campaign with the Virtus.pro’s Dota 2 player Alexey “Solo” Berezin. It features Solo using the Gillette Fusion5 ProGlide razors. While we might not be able to see the commercials on this side of the Atlantic, the commercial is being shown on VK the Russian social media platform. While Gillette has been an active participant in the esports industry, as it has deals with both the Overwatch’s Boston Uprising and Team SoloMid, it’s choice to partner with Solo shows that they are willing to expand within the scene.

This partnership comes on the heels of Roman “RAMZES666” Kushnarev becoming a brand ambassador for Head & Shoulders. It’s no surprise that both RAMZES666 and Solo have acquired brand partnerships as VP has become the most successful CIS team and has won numerous tournaments over the past two years, cementing their place as a top tier organization.

TL Players not Under Contract?

During the cast of Maincast’s tournament, a Dota 2 subreddit user took the time to translate Vitalii “V1lat” Volochai when he talked about why Team Liquid could have withdrew from the DreamLeague Season 10 tournament. The subreddit user, Vitosi4ek, posted their translation that stated that V1lat said, “…Liquid players’ contracts expired after TI8.” This meant that Team Liquid dropping out of the tournament could be due to their players not being signed into a contract. This came as a shock to the community because as Team Liquid had already dropped out of the first DPC minor due to “health reasons.”

As it stands, there’s not a lot of information about what Team Liquid is doing or even what tournaments they’ll be participating in. They don’t have a schedule posted online and they haven’t qualified for any other tournaments yet. The only clarification we received on what the status of the team is in relation to Vitosi4ek’s post was from TL’s team manager who denied all the rumors.

what @v1lat said about my guys is not true.

Dendi Subbed in for Team Secret

Earlier this month, Team Secret announced on Twitter that their mid player Zheng “MidOne” Yeik Nai would be unable to participate in Maincast’s Autumn Brawl tournament. Almost immediately people started to speculate that the infamous Danil “Dendi” Ishutin would be subbing in for Team Secret especially after it was hinted that Team Secret’s sub was an “old friend” of Secret’s captain Clement “Puppey” Ivanov. And once it was confirmed that Dendi would indeed be stepping in for MidOne, the internet went crazy.

In an era where we are seeing more of our favorite OG Dota 2 players retire, it was a great blast from the past to see Dendi and Puppey play together. The last time they had played together was back after TI4 and it was a great sight to see the two of them playing together. While Secret placing at the tournament wasn’t ideal, seeing Dendi and Puppey play together was the highlight of the tournament for us.

New to the NA Dota 2 Scene

The North America Dota 2 Challenger League hit the NA scene just over a month ago. The league’s goal is to help players make that leap from aspiring Dota 2 player to professional player. The NADCL is helping them to make the transition from aspiring player to pro players by giving players the ability to gain experience in a team setting; developing the mechanical skills required to compete at a professional level, and to help them earn an income while pursuing their esports dream. The NADCL is in it’s first season and we’re really excited to see the players that emerge victorious. It’ll be great to see the next generation of professional Dota 2 players emerge from the NADCL.

The season is just starting and we’re really excited to see what happens. Will all the teams stay together? Will any players crack under the pressure of the DPC? Who will be the next sponsor to join the Dota 2 esports scene? And most importantly, will Dendi be picked up by a new team? 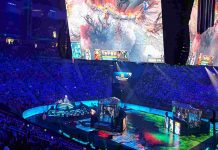