General Stephen Draper -
-6.8k
Path of Exile Shaping Before you start shaping your Path of Exile Atlas, we suggest you read our introduction to the Atlas. Once you have...
Featured image via Pexels.

The “work-life” balance is often discussed in professional circles. When I was interviewing for my day job, both employers made a point to bring it up with me during the interview. There are good reasons for this–it’s important to employers (and millennials) that employees are able to leave their work at work and have enough time to do whatever it is they like to do. Most companies recognize that a clear separation between work and home life makes employees happier, and, in turn, more productive and effective at their jobs.

But how do you achieve this when your life is Dota?

Your average Dota tournament features tens to hundreds of individual matches, all lasting 20-60 minutes on average. That’s a lot of screen time. During times of the year when tournaments are back to back, it can seem like there’s never not a time that I should be watching a match.

Dota’s not something you can have on as background noise and expect to follow. It requires your full attention, otherwise you’ll miss that cheeky smoke gank or disastrous teamfight.

Like many Dota fans, I work full-time during the week. I also have obligations to myself and others outside of work–an apartment to keep up, a gym membership, etc. I have time to check Reddit during my bus commute, but I have to choose between keeping up with the latest political trainwreck or the latest Arteezy meme. It’s a tough call sometimes.

Don’t get me wrong, I absolutely love watching matches. But when “must-see” series start stacking up, it definitely leads to a bit of esports burnout. I’m two weeks behind on Day [9]’s series already. I have DAC Qualifier matches to catch up on as they were played during the night when I’m asleep. When I was unemployed, staying up until 2am to catch an EternalEnvy match was no problem. These days, I have to choose between watching the match live or keeping my workweek sleep schedule at least somewhat sane.

When it comes to large esports tournaments, how many of the matches do you actually watch?

Sometimes, when I get home from work, I get to turn on Twitch and catch a game or two in the evening. Other times, I’ve been standing around in the rain for hours and just want to sit in a warm shower and ponder my choice of career. The matches pile up, because not only do I want to see “the most epic game of [tournament] qualifiers,” but my moonlighting career as an esports journalist means putting in the time to watch events can sometimes be more of a requirement than it is a luxury. I’m not complaining, mind you, and I love my job, but watching a game for your own entertainment is a much different experience than watching it for work. It’s safe to say that the former is more relaxing. You can let your mind wander without worrying that you’re going to miss something important–or, even worse, a piece of info that you’ll need for an article.

I’m mostly talking about watching matches, but the same story applies for playing–remember to not let Dota totally consume your life. Go outside. Learn to whittle. (Editor’s note: carving stuff out of wood is cool. You should learn how to whittle.)

I suppose this is a cautionary tale for esports fans out there. The easiest way to make someone not like a hobby is to force them to do it–pro players deal with this all the time. I’ve found that stepping away from watching tons of matches during the week makes me more excited to dedicate a chunk of my Saturday to them. If you’re feeling esports burnout from the neverending parade of matches and tournaments, take a step back and do something else for a while. The VODs will still be there when you get back. 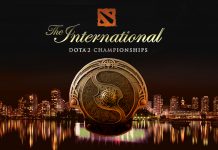