General Stephen Draper -
-6.8k
Path of Exile Shaping Before you start shaping your Path of Exile Atlas, we suggest you read our introduction to the Atlas. Once you have...
via youtube.com ESL Counter-Strike

NiP lost their legend status to an unlikely competitor. FlipSid3 broke their way into the CS:GO Major playoffs with quite an offset. For the first time in a while, FlipSid3 demonstrated their players’ worth.

Legend status grants you an invitation to the next Major. Sponsorship deals that rely on the exposure of CS:GO Majors can be influential in providing necessary financial support. NiP will have to qualify for the next Major instead of receiving a free pass. 2016 brings a competitive climate so dense that qualification can no longer be considered a guarantee.

And now, for the latest Major in Cologne, 3rd place in group B.

NiP’s results at ECS showed sufficient form to expect NiP in the playoffs of the Major but it looks like NiP’s performance re-experienced a dip instead.

Most of NiP’s T side consisted of a default skewed towards the A site. The Ninjas made late A or B site executes depending on their ability to take connector control. By repeatedly taking A at the beginning of the game, NiP managed to condition FlipSid3 to neglect B – making them vulnerable to sudden B rushes. The Ninjas rushed B whenever FlipSid3 looked to make a comeback.

NiP gave away many rounds on CT by stacking sites. They took gambles by stacking three or four people on either A or B, which didn’t work out in their favor. Either way, NiP won the first map 16:14, although arguably not as a result of their efforts. F3 weren’t hitting required shots, causing them to lose although their tactical foundation looked sound.

F3 demolished NiP in the first half with a 14-1 score.

NiP made the early mistake of forcing on the second and third round. Their economy fell out of balance at the start of the game.

NiP were repeatedly picked off while crossing onto bombsites. F3 players on highway focused pyth coming out of squeaky, and the others crossing from A main onto the site. On B, NiP would only make the plant with two surviving players, so rotating F3 players easily cleaned up.

NiP couldn’t escape their deficit in the second half.

Game 3 carried high hopes for NiP as they like to play on Mirage. Most analysts expected NiP to win.

Tides turned once the game began as F3 stormed onto the map with three solid T rounds.

F3 ran a very flexible default, with various adjustments for taking either A or B. Basically, they pushed the sites depending on their mid engagement, and pinched NiP with well-timed lurks.

Rounds were as close as the half, which ended at a 7:8 score in favor of FlipSid3.

NiP approached their T side in a similar way to F3, with the key difference that the Ninjas performed more full site executes. Whereas FlipSid3 poked and prodded around the map much like Fnatic do, NiP threw all their utility on either site and prayed for success. Like their CT side on Overpass, their T sided play on Mirage involved an element of gambling.

NiP is the poster team of CS:GO. This is the first Major where they didn’t make the playoffs. Given that they’ve been doing incredible well in all other recent tournaments, this result comes as a surprise.

In some sense, a looser game style with mid-game calls could have prevented the loss streaks that occurred on Mirage and Cache in particular. Gambling accounts for inconsistent results. Threat doesn’t make many mid-round calls. He just closes his eyes an hopes for the best.

Reality is closing in on the Swedish stars. NiP has been swaying dangerously close to the loss of their legend status and it finally happened. Now it’s time for the Swedes to rehone their form to a level that can dominate with consistency.

Previous articleValve Skin Gambling Ban: From the Frying Pan into the Fire
Next articleVirtus.pro at ELEAGUE 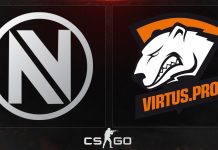