General Stephen Draper -
-6.8k
Path of Exile Shaping Before you start shaping your Path of Exile Atlas, we suggest you read our introduction to the Atlas. Once you have...
They're ready to get Loud9.

Esports Edition snagged an interview with Cloud9’s CS:GO squad at Northern Arena. As to be expected, they’re a charming bunch, and with the addition of Timothy “autimatic” Ta, the team has been dominating their North American opposition and looking stronger than ever. Is it tank top season for Cloud9 again?

Jake “Stewie2k” Yip: Something about running through smokes.

EE: n0thing, during the period you were calling for the team before picking up Slemmy, your CT sides were really incredible, but your T side left a little to be desired. Was there something about your IGL style or the team that you think caused this?

We had some good ideas, they just never really came to fruition. We also didn’t really practice hard enough, which could have been my fault—not that we didn’t practice, we just didn’t work on the ideas maybe as much as we should have. Now that our boy [Timothy “autimatic” Ta] is on the team, I think it’s just a bit more balanced out. Stewie’s been calling a lot, and that’s been helping.

EE: We asked our readers to send in some questions. Here’s one: do you guys play with your shoes on at home?

Team, in unison: No.

Tyler “Skadoodle” Latham: I do. Sometimes.

Michael “shroud” Grzesiek: I mean, sometimes you’ve got to switch it up, but it’s not really shoes, it’s—

EE: Nice. Slippers are where it’s at. So, everyone remembers Cloud9’s amazing Summer 2015 hot streak. Are you guys going to break out the tank tops again soon and start flexin’?

n0thing: If the heat’s up, we break out the tank tops. I mean, we’re hoping to heat it up in-game regardless and get some of those results back. We want to look for a win [at Northern Arena], Bucharest, and Kiev next. I don’t know if we’ll get the tank tops—one of the issues was they didn’t show off any of our sponsors. If [our sponsors] want to hook us up with some unique tank tops, I’m sure we’d play in them. I mean, sometimes you feel restricted when you have to wear the shirts.

At home, anywhere from three to five of us will be wearing the practice shirts in our online matches. Practice how you play.

EE: Here’s another question from one of our readers. Who has the most expensive skin on the team?

n0thing: You mean his Dragon Lore or the knife?

autimatic: He’s got a Ruby StatTrak.

EE: Who’s the biggest complainer on the team?

n0thing: In game or out of game?

Shroud: It is you! You just openly said it’s you. [Pause.] Wait, in-game or out of game?

n0thing: I take pride in my complaints! I want the best for me and my team. [Pause] But, yeah, I complain sometimes.

EE: How about in-game?

Shroud: Well, he’s not picky, but—

EE: Thanks for chatting with us, guys! Good luck!

We’d like to thank Cloud9, as well as the staff at Northern Arena. Interviews were conducted by Patrick Valoppi, Herbert Lemus, and J.P. Corner.

Previous articlePower of the Playmaker: A Double-Edged Sword
Next articleHeroic Interview: Self-Ownership, Teamplay, and More 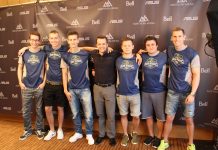