Hearthstone Masters Korea is a tournament hosted by the South Korea cable television channel OGN, who specialize in esport broadcasts. The tournament features exclusively Korean players, and boasts a prize pool of 42 million Won (approximately $36, 000 USD). The players are all strong Korean players, many of whom have competed in world championship tournaments in the past, although there are some newcomers to spice up the field. The format is Conquest, where each player brings five decks, then at the beginning of the round each player bans one of their opponent’s decks, then picks three of their four remaining decks to compete in the best of five. The round of sixteen has concluded and we are now in the group stages. Group B has now concluded and here are the results:

Time came first with a match score of 2-0. In the round of sixteen he went 3-1 against Gravekper, a very popular Korean streamer. He is a new player on the scene and the only player to advance out of the round of sixteen who does not have a team. The decks he brought were Patron Warrior, Secret Paladin, Midrange Druid, a particularly interesting Combo Warlock, and a Hunter that was not seen. He had a very consistent playstyle, choosing to ban Warlock and to not bring Hunter in both matchups. His first opponent was Flurry, and both players banned and brought the same decks, even the same archetypes. Time managed to come out ahead 3-1 however. The second match against Steelo was a lot closer, and Steelo was up 2-1, largely because of Time’s Combo Warlock underperforming. However, Time managed to snatch up a game with it and turn the series around to win 3-2 and advance to the finals.

Steelo came second with a match score of 2-1. He advanced from the round of sixteen going 3-1 against Fanta. He is a popular Korean streamer who plays for All-Killers, one of the top Korean teams. He is also the crowd favourite for the tournament. The decks he brought were Tempo Mage, Zoo Warlock, Secret Paladin, Midrange Druid, and Control Warrior. Interestingly, although all the players in this bracket have Warrior, Steelo is the only one who brought Control Warrior, the others all choosing to go with the Patron variant. Steelo’s bans were Hunter, Paladin, and Hunter, and he chose not to bring Warlock, Warrior, and Paladin, showing him adapting quickly to the tournament. His first match against DDUPDDEP was a fairly quick 3-1, quickly beating the newer player. His second match against Time started out the same way with Steelo taking a 2-1 lead, but Time managed to stabilize and come back to win 3-2, knocking Steelo to the lower bracket. His third match was against DDUPDDEP once again, and despite some variation in deck choices, the result was the same as he took a commanding 3-0 to advance.

DDUPDDEP came third with a match score of 1-2. He advanced from the round of sixteen going 3-1 against Kodulgi. He plays for genius, a fairly new Korean team, and his name comes from a sound in the Korean Warcraft. The decks he brought were Face Hunter, Midrange Druid, Patron Warrior, Oil Rogue, and an unseen Warlock. He banned Mage, Warlock, and Warrior, and chose not to use Warlock, Rogue, and Warlock, also showing some variation. His first match against Steelo went quite poorly as the popular streamer quickly beat DDUPDDEP 3-1. His next opponent was Steelo’s teammate Flurry, but this time DDUPDDEP stepped up and beat the All-Killers player 3-1. He was given another chance against Steelo, but this resulted in an even more disastrous 0-3 defeat, knocking him out of the tournament.

Flurry came fourth with a match score of 0-2. In the round of sixteen he beat YOUNGJAE 3-2 to advance. While not as popular as his teammate Steelo, Flurry is another experienced and well known player, also on All-Killers. Here he brought Aggro Shaman, Secret Paladin, Midrange Druid, Patron Warrior, and a Warlock deck that was not seen. He took the same tact as Time and chose to ban Warlock both games, while choosing not to bring his own Shaman and Druid. His first match against Time went poorly, despite being the crowd favoured in the matchup. He went 1-3 and was dropped to the lower bracket. There he faced DDUPDDEP, and Flurry simply couldn’t get his legs under him, once again falling 1-3, being knocked out of the tournament. 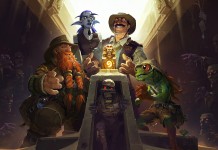