Recently, we discussed what skill ceilings and skill floors are. One of the things we touched on in the article was that Hearthstone, because of the emphasis on deck creation, is home to plenty of viable decks that have an inherently low skill floor. However, at the same time, players can also create decks that require a great deal of knowledge and perfect execution in order to be piloted successfully. In a sense, players are able to choose their own difficulty level. Currently, there’s a top competitive deck–Dead Man’s Hand–that has one of the highest skill ceilings we’ve ever seen. But there are plenty of high skill ceiling Hearthstone decks out there if you feel like testing your mastery of the game.

Dead Man’s Hand is the current highest skill cap deck in Hearthstone. Amidst a thousand agro decks, this slow roll fatigue deck stands alone. Only the most talented Hearthstone players are able to pilot Dead Man’s Hand successfully. Rather than killing your opponent, the Dead Man’s Hand deck uses a mixture ofremoval spells and the Warrior Death Knight in order to wear down their opponent’s cards. At the start of the game, you use your hero power, then keep your armour up with Bring It On! and Armorsmith. To keep your handsize healthy with a Dead Man’s Hand deck, you play Battle Rage, Acolyte of Pain, and Coldlight Oracles.

The real skill of the deck comes in the card that gives the deck its name. Dead Man’s Hand shuffles a copy of your hand into your deck. By including two Dead Man’s Hand cards in your deck, the size of your deck is infinite. Suddenly, every card becomes a potentially infinite resource, and playing your Dead Man’s Hand at the wrong time–even just once–can easily destroy your shot at winning the game. The reason this deck is so difficult to pilot is that you have to understand the win condition of every single deck in the meta, and make sure your infinite hand has the right tools to deal with it. For example, against a flood deck you’ll want to use Dead Man’s Hand to keep yourself stocked with Brawl or Sleep with the Fishes. You want to keep an Execute in your deck against most decks. At some point in the game, you’ll usually want to stop creating copies of Battle Rage, since that particular card only cycles itself when you have no minions.

Using your health as a resource in order to make the most of your removal is part of what makes this deck have a very high skill ceiling. Do you take the extra four damage and use your hero power to finish off the 4/1 next turn? It depends on the board state, who you’re up against, what cards your opponent has already played, and the other cards you’re expecting them to have in their deck. Understanding every deck in the current meta–and anticipating possible variations of them–isn’t easy, but it’s necessary if you want to pilot a Dead Man’s Hand deck successfully.

We can’t possibly talk about high skill floor decks without mentioning Grim Patron. Unfortunately, Blizzard decided to nerf Warsong Commander into oblivion, which was the bread and butter of Grim Patron, and it’s no longer viable. This is the deck that professionals used and had 60%+ win rates on. It’s the same deck that had an under 40% win rate below rank five. In other words, it’s one of the highest skill floor decks in the game — the vast difference in win rates according to player skill shows us that you needed to be an excellent Hearthstone player to consistently win games with Grim Patron.

The deck revolved around getting the right combo pieces in your hand, then going in for a one hit kill. With the right Emperor Thaurisan tick, it was possible to deal nearly infinite damage. It made use of Frothing Berserker, Grim Patron, and Warsong Commander. Warsong Commander gave Grim Patron Haste. It also gave the next Grim Patron brought into play Haste. And the next one. And the next one. Using Whirlwind not only dealt damage to everything for Frothing Berserker, but it also doubled your Patrons, who created new Patrons if they survived damage. If your opponent was stupid enough to play anything with less than three attack, congrats, you just got another batch of Patrons on the board. This site explains how it felt to play against a Grim Patron Deck.

The real difficulty of piloting this deck was the mental math needed to accurately predict your damage output. If you wanted to figure how much damage your Frothing Berserker is going to do, you had to keep track of a huge number of variables.

Hmmm…maybe I’ll play Warsong, Frothing, and Patron. Then I’ll Inner Rage the Patron, that’s +2 damage on it, +1 on Frothing, as well as another Patron. If I play Whirlwind, that’s another 4 damage added to the Frothing and two more Patrons. Killing their minions gives me two extra damage on Frothing per attack…

You get the idea. There were many games where professionals underestimated their damage and didn’t kill their opponent. There were far more games where pro players didn’t think they had lethal, but they did and just couldn’t add it fast enough. Since each of the cards had a long animation, if you didn’t start executing your combos at the start of your turn, running out of time was a real possibility. Lots of professional games were decided by time in the Grim Patron era.

Echo Mage was one of my favorite decks of all time, so I might be a bit biased on this one. And in all fairness, several other decks have done similar things, so they might be just as difficult. But we’re choosing Echo Mage because it was my baby, and the subject of my very first guide for Esports Edition.

Echo Mage was built around Giants, Duplicate, and Echo of Medivh. And Emperor Thaurisan, because he’s quality of life for every synergistic deck. This was before Arcane Giant, which is why he isn’t in the deck. Instead you ran two Molten Giants (pre-nerf) and two Frost Giants. You stalled for a long time until you can use your hero power enough times, as well as get set up with Ice Block and hopefully Duplicate. Then, once your opponent puts you low enough, you drop Molten Giant, Molten Giant, Frost Giant, Frost Giant, Echo of Medivh. You may not have all the giants, but as long as you have two or three it works fine. If you had another Echo, you could keep playing the new ones and then Echo again. I often filled my entire board and had seven more Giants in hand in a single turn.

The most difficult part of running an Echo Echo Echo Mage deck was deciding when to commit to a play. A bunch of giants sounds strong, but you don’t have infinite giants, and many decks have the tools to deal with full boards. If your opponent has Twisting Nether, Brawl, or Equality Consecrate, you’re out of luck if you overcommit. You also need to know when playing the Molten Giant in your hand is the right play against fast decks, even when you don’t have any of the other combo pieces. The emphasis on adaptations and being able to react to different scenarios is the reason I loved this deck. It wasn’t like many combo decks where you needed to have every piece in your hand to win. It paid for that by not being a true one hit kill deck, but the versatility of this deck was fun and rewarded careful play. I can’t count how many games I played Thaurisan with a Duplicate up and ended up having five Thaurisans in a game. He’s not a Giant, but he’s a big card that forces an answer. Adapting is the key and what made the deck so hard. 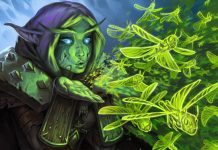