General Stephen Draper -
-6.8k
Path of Exile Shaping Before you start shaping your Path of Exile Atlas, we suggest you read our introduction to the Atlas. Once you have...
(Image credit: Deep End Games.)

With all the gloriously gross video game monsters out there, any sort of horror game has a lot of stiff competition. Between fast-moving zombies and Pyramid Head from Silent Hill, it feels like every horror trope has been covered thoroughly. When you find something new in the genre, it’s a deep breath of terrifying fresh air.

Fundamentally, we’re all scared of the dark more than anything else. We seek out the light even in digital worlds. Game developers know this and employ directional lighting and other techniques to either reassure us that we’re safe in an area or, a la Resident Evil 4, there’s nothing but overcast skies because we are never safe and danger can strike at any moment. But what about a total absence of lighting? Perception is a relatively new game from Deep End Games (founded by one of the guys who worked on BioShock and BioShock Infinite), and published via Feardemic. You play as Cassie, a young blind girl who uses echolocation to “see” the world around her. Cassie is travelling to New England to visit a house to uncover some of her own history, and in the process, discovers the true horror behind the occurrences in that house.

Editor’s note: We’ve kept our review of Perception free of any major plot spoilers, but our descriptions of gameplay might count as minor spoilers or change the way you play the game.

In the beginning, you have two options: Chatty Cassie or Silent Night, which allows you to choose the amount of dialogue and limit it only to plot-critical lines, if you so decide. As a lot of the game plays with you uncovering objects and remarking on them, if for some god-forsaken reason you decide to speedrun this game, you can certainly cut down on a good amount of time by going Silent. However, in the dark of Perception, you will certainly want a friendly voice every now and then. With Cassie’s echolocation, you see the rooms in sonar-esque flashes that fade quickly, unless you are constantly generating or near a source of sound. Cassie navigates by tapping her cane, which gives you a flash of the immediate area, but too much noise may attract enemies.

As she goes along, Cassie uncovers letters (read via your cellphone’s text-to-speech program) or voice recordings that begin to create a timeline of what happened to the residents of the house. I don’t want to divulge too much of the story, but you have multiple chapters, all taking place in the same house, during different eras. The layout of the house remains the same, but the interior decorations are all specific to the time period and are rather beautiful and intricate in many cases. The devil is in the details, and there are plenty of awesome and gory details in Perception, even if Cassie’s echolocation only shows the shapes in blue.

There is no fighting system in this game, and you only have one clear enemy – an entity known as “The Presence.” As you get close to The Presence, you see the screen change colors accordingly, and the further you progress in the game, the more touchy and noise-sensitive it becomes. You can easily evade this enemy by being silent and navigating with a pitch-black screen which is extremely frustrating, not to mention boring as you can’t pick up objects you can’t see. Or you can tap your cane away furiously, listening intently to the background to hear when you’ve pissed off your housemate to the point of no return, and hide in objects like chests or behind shower curtains until it passes. I am of the latter school of thought, and continuously died close to the end of the game, because there aren’t really repercussions other than having to begin at a separate point of the house.

There are no life bars, no “game over,” just some hideous snacking noises and a red screen to indicate that you’ve been consumed by The Presence, which manifests as some sort of Lovecraftian abomination in a red cloak with a deer skull over it’s face and a horde of moths. The moths are a reoccurring theme when you get closer to plot points, because who didn’t love Silence of the Lambs? That being said, it is a very effective mechanism for fear – the sound design in this game is excellent at making a dark screen feel very ominous as you listen for the hissing/clicking combination of an angry Presence to chill out. You hearing your breathing and your heartbeat in your ears, and truth be told, it’s a little too freaky at night to play wearing headphones.

Perception is the first game in a long time that genuinely scared me and resulted in some moments of “ohshitohshitohshit” and some quality jump scares. There are freaky owls, dolls (ugh), and ghosts to keep you on your toes throughout, and the voice-acting is quite good for such a small cast. The storyline might seem simple at first, but rapidly gets much deeper as your delve into the lives of previous residents, male and female, and try and find the connecting thematic elements. While I spent too long getting lost in the same exact areas (the house has the same layout for god’s sake), playing through a game about a blind girl that wasn’t demeaning or condescending was a pleasant surprise. Cassie’s independence is central to her character, and a strong female protagonist with physical limitations is pretty damn cool in my book. Overall, Perception is a pretty cool game. The replay value is definitely not there, but for the 3-6 (depending on how much of a scaredy-cat you are) hours of good story, I think Perception is worth a playthrough.

Between its innovative mechanics, intriguing stories, and a ballsy lady lead, Perception is a winner. While there was definitely the potential for more spookiness in the middle section of the game, Perception brings exciting new ideas to the horror genre and executes them successfully. Grab your headphones, turn off the lights, and happy tapping, friends.

Perception can be purchased on Steam for $22.99.

Esports Edition was provided with a copy of Perception by the developer, free of charge, in exchange for an honest review. As with all our reviews, our opinions are our own, and positive reviews are only awarded through good gameplay. Check out our Ethics Policy for more information. 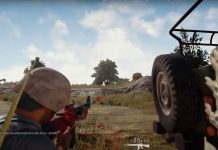