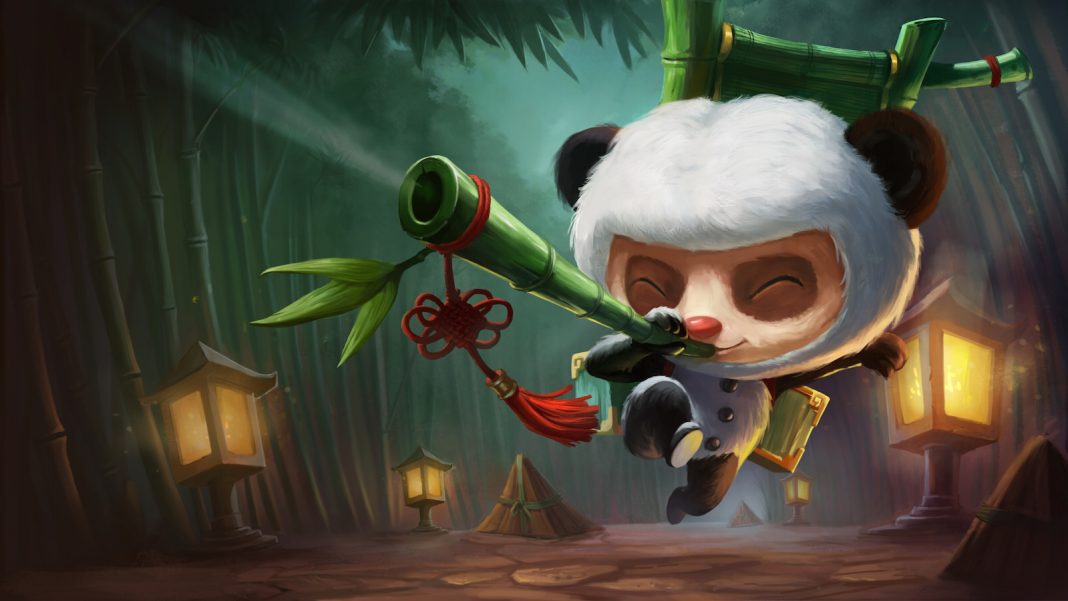 When you lane against a ranged champion as a melee, your opponent starts the game with a huge advantage. Any time you step into their range, you’re eligible to take free damage. This is most dangerous in early game: pre-6, when you haven’t leveled all your skills yet. The trick to winning a melee vs. ranged lane is to survive this phase. After you’ve done that, you need to identify and exploit whatever advantages you think you have over your opponent. It could be your tankiness, mobility, sustain and healing, or 1v1 superiority. Your opponent is trying to abuse their small advantages too, but your job is to avoid the situations you know they are looking for, whether it be teamfights, sieging, or split-pushing.

The sacrifice of being a ranged champion is that, in general, Riot has decided that you’re going to be squishy — you’ll almost always have less HP and armor than your melee counterparts. Just check out this selection of melee and ranged champion base stats, and you’ll see that ranged champions are, overall, a little weaker. 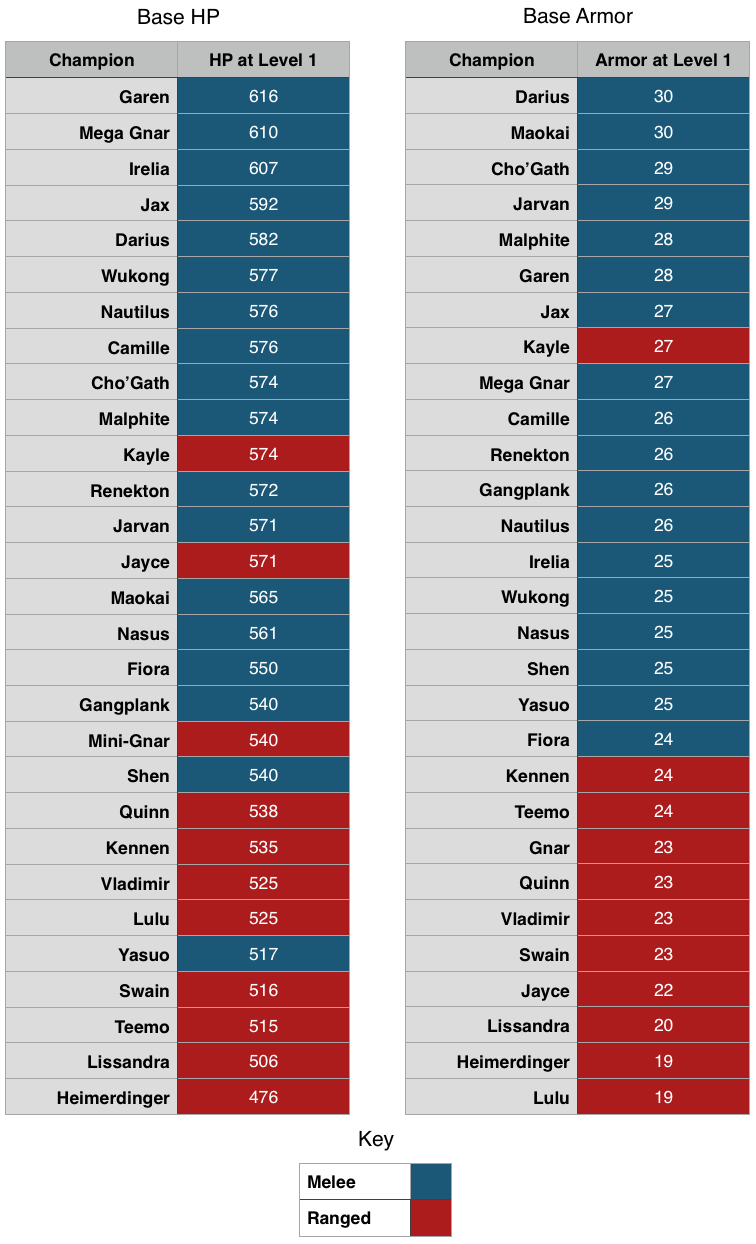 Tankiness is good for teamfights. When you are a tanky champion with good utility and crowd control, you want to get champions like Quinn, Teemo, and Jayce into teamfights because their margin for error is much higher–if they take a well-timed CC spell, they can get blown up, whereas you are meant to absorb CC.

Unless you have been poked down too low, your tankiness will help you win all-ins against squishy ranged during middle laning phase. Squishy champions do not very well handle having a Garen or Jax in their face. Going for the all-in is a viable strategy when the alternative play is getting poked out of lane.

Use your sustain and build conservatively

Improving your sustain is a good counter to poke and bullying. Doran’s Shield/Sword, Spectre’s Cowl, and Ninja Tabi are all low-cost ways to get some survivability into your build. Building early damage is not super important when your lane is tough.

reach a power spike, just acknowledge in your play that it will be delayed if you do decide to invest in an early Cowl or Tabi.

A handful of melee tops even have healing built into their kit, such as Cho’Gath, Renekton, Irelia, Maokai, and Nasus. Remember, you are trying to survive the tough early game before blowing it wide open.

When your opponent stands in your minions and auto attacks you, they start taking minion aggro. This pushes their lane, because your minions change targets, while theirs continue attacking yours. Pushing the wave can be a smart, aggressive play, but it has to be done carefully because it leaves the pusher open to ganks. If your opponent is mindlessly pushing, just wait for the right opportunity to capitalize with your jungler. Even the small auto attack trading that takes place at level one will eventually push the lane towards towards the safety of your tower. 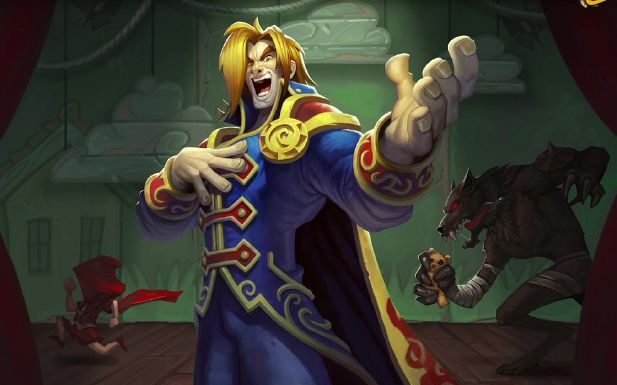 Another strategy you might consider against ranged champions is shoving the lane. Cho’Gath, for example, can often shove lanes, using his sustain to shrug off the chip damage from minions and pokes from opponents. When you shove your lane, your ranged opponent now has to use their spells on minions instead of you. I find this particularly useful against Vladimir and Swain, two ranged AP tops with poor early waveclear.

Abuse your mobility to make plays

Ranged players should try to keep their opponents at max range, but good bruisers will use their gap-closing abilities and movement speed to get on top of them and force winnable all-ins.

There’s a simple mini-game with gap-closers and mobility–whoever has more will usually win the fight. As a melee champion, stand on top of you ranged opponent and save your gap-closers for when they use theirs to escape. Don’t use your gap closer to initiate the fight. Some champions, like Darius, don’t have mobility until they finish their Phase/Black Cleaver, then they become a lot stronger.

Example 1: Irelia uses Bladesurge reset on a caster minion to get within auto range of Teemo. He can flash, but Irelia still has her Bladesurge ready, and thus has an advantage in the all-in. If Irelia had instead Q’ed onto Teemo without the reset available, her all-in is a lot less potent.

Example 2: Darius looks for trades only after proccing his Phage’s Rage unique passive. The mobility speed gives him some gap closing ability, and zones his opponent farther back.

Having Flash is often the difference maker when deciding whether or not you can make a play. Sometimes you aren’t diving your lane opponent, and you’re all-inning the enemy ADC. Against a topped-off Lucian with Heal, Flash, and Relentless Pursuit (E), Lucian should have enough tools to kite a fleshless Renekton, who only has two instances of mobility: his Slice & Dice (E).

Win at your game, and don’t let them play theirs

Split-pushers like Teemo want to maximize alone time with their lane opponents behind a fortress of poison mushrooms. Similarly, auto-attackers like Kayle, Kennen, and Jayce do much better in a 1v1 than in a teamfight, so if you can’t beat them 1v1, try to force a 5v5 fight. Pure damage dealers scale really well, especially against tanks or bruisers who peak in mid-game, but later had to split their resistances against physical and magic damage. When vying for a teamfight or an objective take, be decisive, because the only thing worse than being stuck against a split-pushing Kayle is leaving the Kayle alone to free-hit your towers while your team deliberates taking action. If you can force a split-pusher to stay with their team, you’ve taken away one of their win conditions.

If your opponent doesn’t know, or hasn’t even thought about how their champion pick will win them the game (and you have), you are already on a good track to win. Starting the game as a melee champion against a ranged opponent is just a disadvantage. 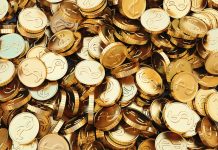