General Stephen Draper -
-6.8k
Path of Exile Shaping Before you start shaping your Path of Exile Atlas, we suggest you read our introduction to the Atlas. Once you have...
from esports.giffgaff.com

One thing that sets Dota apart from League is the relative frequency of non-Valve tournaments. While Riot officially runs all LoL tournaments, there are many Dota ones that aren’t involved with Valve at all. While these tournaments tend to follow the same pattern, i.e. qualifiers, group stage, playoffs, etc., they have their own set of rules and their own admins. This can create confusion (especially over the use of stand-ins) and inconsistency in rule enforcement.

Allegedly, VP let No[o]ne, a player on Vega Squadron, use VP.Alohadance’s account for an official match. Alohadance DC-ed during a game and VP was forced to use up all their pause time. AdFinem donated two minutes of their pause time but Alohadance was unable to reconnect. VP played 4v5 and lost. No[o]ne was streaming during this time and mentioned on stream that he had to abandon to play for VP.

When the next game started, Alohadance appeared to be back. A very observant fan noticed that his items were arranged differently than usual. After comparing the item slot arrangement on Aloha’s previous Juggernaut games and No[o]ne’s previous Juggernaut games, it seems suspiciously like No[o]ne may have been using the account. Nothing’s been proven yet, and Beyond the Summit studio (organizer of the Summit 5), is looking into the accusations.

In the past, there have been many accusations levied at tournament organizers about admins not enforcing the rules equally or leaving it up to the opposing team to make decisions. A common issue is the use of pause time to wait for a player to reconnect. On several occasions, teams have run out of pause time while waiting and the game admin has asked the other team if they would like to ‘donate’ some of their pause time to the cause. This creates a really uncomfortable situation for the opposing team – say yes in the spirit of sportsmanship and you end up wasting your own time that you may need later. Say no, and you get a bunch of pissy fans raging at you, especially if you end up winning.

For the record, no referee walks up to Bill Belichick and says “Hey, the Giants used up their last timeout on that play, do you guys mind giving them one of yours?” Asking the other team to donate time is a situation fairly unique to eSports. The admin in a match is supposed to be an entirely neutral party with no horse in the race, so to speak. Asking an opposing team to make decisions affecting play is ridiculous.

Unfortunately, sometimes the admins have to deal with threats after making a ruling. Bettors who lose money on a game blame the admin’s decisions and harass them as a result. The fan reaction to KotLGuy’s decision was positive though, as he did his job and enforced unpausing when VP ran out of time.

In the case of No[o]ne’s alleged use of Alohadance’s account, I’m not sure how much guidance the current rules will provide. Rules can be written to say “use of stand-ins is allowed” but if they don’t specify that you can’t swap players mid-series the rule is up to some interpretation. It seems odd to me personally that No[o]ne would announce on stream that he had to leave to play for VP if he thought it was breaking the rules – why risk saying it publicly? It’s up to BTS to investigate, but handing down punishment is going to be tricky.

The key is consistency. Whatever BTS decides to do (provided the accusations against VP have merit), they must do in the future should the situation happen again. Admins should stick to enforcing the rules as they are written, as unpopular as those decisions may be. It should never be up to another team competing in the tournament to make decisions affecting gameplay. While I like having non – Valve tournaments to change it up a little, it would be great if we could keep the rules and their level of enforcement at a consistent level for the sake of the players and fairness.

Previous articleDota’s Most Underrated Heroes
Next articleLegitimacy and eSports – What Should We Clamor For? 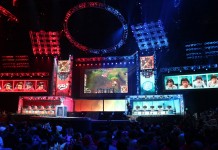 Legitimacy and eSports - What Should We Clamor For?