General Stephen Draper -
-6.8k
Path of Exile Shaping Before you start shaping your Path of Exile Atlas, we suggest you read our introduction to the Atlas. Once you have...
I'd definitely r8 this 8/8. What a lovely screenshot.

Here’s a challenge–load up a game of Matchmaking in CS:GO and see many rounds you can play before a teammate complains about being “baited.” It shouldn’t take too long. And if the game goes sour, you can bet your Asiimov that someone is going to blame the loss on this alleged baiting.

But like cholesterol, there’s good baiting, and there’s “bad” baiting. Most of the “bad” baiting happens on the Terrorist side, at least in PUGs. Players will turtle across the map, often in pairs of two, waiting for another player–whether it’s a teammate or an enemy–to take the initiative. Most players in CS:GO end up doing the “bad” baiting by accident, to be honest. It’s a symptom of playing scared–maybe you’re not confident enough in your aim to take the duel straight up, so you’re waiting for the other team to make a mistake or for a teammate to make an entry on a site. I suppose it’s the non-consensual nature of most baiting that generates such high levels of salt in MM and other matchmaking services–in a team environment, it should be easy to request that someone bait for you in a certain position, or offer to bait for someone else. But in PUGs, players are rarely willing to initiate the coordination of a bait setup. I attribute this to a potent mixture of laziness and social discomfort. It’s kind of awkward to ask someone to be your human sacrifice. So, most baiting, even the good kind, happens without permission–hence the saltiness.

If you put aside your ego, there’s nothing wrong with one player distracting the enemy so that another player can get an easy frag. Issues only arise when a bait setup goes wrong due to poor coordination and communication–the baiting player waits too long to peek, or, even worse, doesn’t peek at all. Successful “baiting” in MM usually goes unnoticed because there’s nothing to complain about. It’s unrealistic to expect a bait setup to work every single time, but they can be devastatingly effective ways to change the momentum of a round or catch groups of opponents off guard.

Bait It ‘Til You Make It

At the end of the day, baiting is a simple tactic based on one of the core principles of play in Counter-Strike: trading kills. Rounds are won and games are decided based off of your team’s ability to trade effectively. This is as true at the casual level as it is as the professional level.

To be honest, I want more baiting in my PUGs, I just want it to be the right kind of baiting.

Together, we can become master baiters, dear reader. Starting right now. It’s incredibly easy, requires very little coordination, and it’s a perfect illustration of how you leverage both psychological and positional advantages in bait setups to beat your opponents.

For the purposes of this article, I’m giving the following definitions. The Bait is the player who distracts or draws attention by either taking first contact or making an aggressive play. The Baiter is the player who is expected to capitalize on that distraction. It doesn’t matter if the Bait doesn’t get the kills–that’s the job of the Baiter.

Today, we’re going to take a look at Mirage. More specifically, the map’s A bombsite. Even more specifically, we’re going to look at how you can use a ridiculously simple bait setup to put a stop to the standard A site smoke execute. Don’t worry, I’ve included pictures, in case words make your head hurt. First, you’ll need one teammate who’s willing to go along with your plan. Shouldn’t be too hard, right? 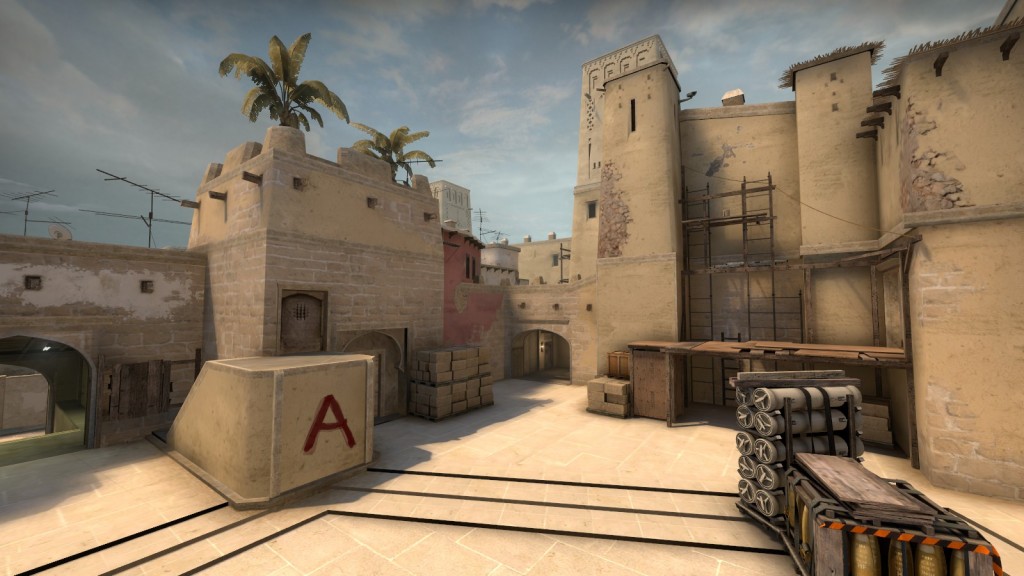 What do we need?

What do we do?

Whoever has magnanimously assumed the role of Bait throws their smoke to cover off Ramp at the start of the round. Once the smoke has popped, both the Bait and the Baiter toss their HE grenades into Ramp–finding the perfect timing for these grenades can be tricky, but if the Terrorists are pushing into ramp early or have gone for an immediate smoke execute, it’s easy to deal significant damage or, sometimes, pick up a kill.

As soon as the HE grenades have been thrown, both players should move into their respective positions for the setup. The Bait takes an aggressive position towards Ramp, as shown below. 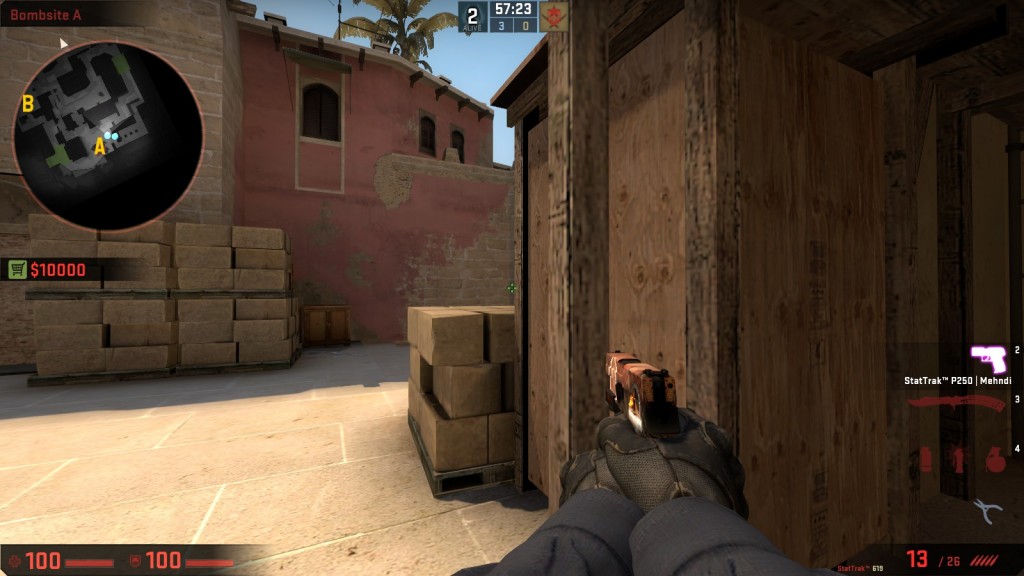 If you’re the kind of Bait who gets separation anxiety, don’t stress it– your Baiter isn’t far away. In fact, they’re kind of invading your personal space. The Baiter posts up in the far-left corner of Shadow (underneath Palace, in the corner towards Ramp). Here, check it out. 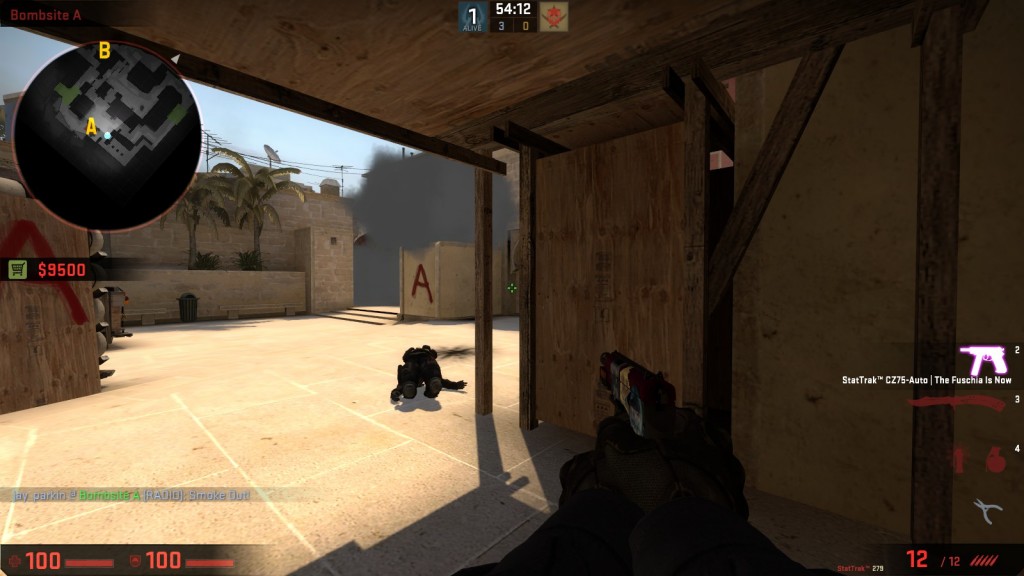 The Bait has the easier job: fight any Terrorists who come out of ramp, do as much damage as possible, and then die. (The last step should be pretty easy for most players.) Most importantly, the Bait should be jiggle-peeking the angle towards Ramp, using the wooden barrier underneath palace as cover while they ADAD spam with their pistol. And then they need to make sure they die.

It’s okay, though, your Bait didn’t die in vain. That would be stupid. See, your pal–the most feared Baiter in the Wild West–is going to wait underneath Palace while you die. They’re not going to lift a finger to stop it, of course, but please don’t take it personally. You died for the greater good, Bait.

Here’s where it gets good. The Bait, by jiggle-peeking Ramp from underneath Palace, is effectively creating a temporary blind spot for the Terrorist team. It’s uncommon–if not downright stupid–to defend the A bombsite with two players underneath Palace, and Terrorists will usually continue to push the site and clear out other positions after killing the Bait. They’re probably not going to check under Palace.

Deathcam information is a crucial part of this defensive strategy–the Bait needs to accurately call out the movements of the encroaching Terrorist side to the Baiter, who can then time their peek accordingly. Most smoke executes involve three or four Terrorists pushing A Ramp, and the combination of grenade damage, pistol shots that the Bait landed, and an unexpected avenue of attack gives a decisive and undeniable upper hand to the Baiter in this situation. Even if the Baiter only manages to snag two kills before dropping, a 3 v 3 retake on the A bombsite with pistols and armor is very feasible.

If you’re lucky enough to have another cooperative teammate, you can tweak this setup to make it even more effective. Just have a third player–who is, I suppose, also the Baiter in this situation–position themselves in Sandwich during the initial grenade deployment. Now, the CT side is able to establish a deadly short-range crossfire after the Bait dies. even more after the Bait dies–especially when armed with pistols, the short-range crossfire between Shadow and Sandwich can be used to devastating effect.

Of course, the other team could just go B that round. If that happens…well, hey, you tried, right? You can save your armor/pistol and try it again next round.

Did you try using this setup in a game? How’d it go? Send videos of you baiting your teammates to joshua@esportsedition.com, and we’ll feature it on our website! 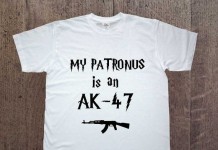