Reviews Stephen Draper -
-280
We were lucky enough to receive a Roccat Kova gaming mouse last month to review. I’ve used the mouse extensively, and have...
Image via: https://images.smash.gg/images/tournament/1375/image-378fd2ee5b745f559dd8cf39f5498a3c.jpg

This past week Smash fans across the world were treated to one of the strangest casual tournaments the world of Super Smash Bros. has to offer, Smash’N’Splash. Smash’N’Splash (or SNS) is in its second year as a nationally recognized  tournament. The tournament differs from most others due to a very casual attitude and the fact that the tournament is billed as a “Waterpark Tournament.” This self-proclaimed distinction is just what it sounds like, the tournament is held over 2 days at a waterpark at the border of Illinois & Wisconsin. To keep with the casual theme, the tournament also hosts brackets of nearly every version of Smash you could think of including: Melee, Project M, Smash WiiU, and Smash 64, as well as a doubles bracket for each of the titles.

To make sure we cover all our bases, the top finishers in each Smash game were:

As mentioned before, SNS is a casual tournament, meaning it does not always draw the biggest names in the Smash world. This year’s event did have its fair share though, as legendary Melee players Mew2King, Hungrybox, and Swedish Delight all came to play in the pool consisting of both amateurs and pros. The 3 big names finished in the top 3 spots of the Melee bracket which was shocking no one. The big surprise actually came during the grand final match between Hungrybox and Swedish Delight.

Swedish Delight had been playing standard fare throughout most of the tournament. After finding his way to the grand finals with little to no trouble playing as Sheik, Swedish decided to embrace the fun atmosphere of Smash’N’Splash to its fullest and elected to finish the tournament as Luigi. Picking Luigi and sticking with him for a complete match is not a common sight in competitive Melee. In fact, I can’t recall another time when we saw a Luigi play against one of the Gods of Smash, especially not in a grand final.

For those unfamiliar with the common meta in Melee, it is generally accepted that the best characters for tournament play are: Fox, Falco, Marth, and Shiek. After them are Captain Falcon, Jigglypuff and Peach, although these three are mostly played by only a few top players. Luigi does not show up on any typical tier list until about position 12, and is usually found even further down the list than that. The top S-Tier characters are chosen because of their speed of play, available counterplay, priority in moves, and ability to combo. Luigi is relatively slow in comparison and has a very tough time controlling an opponent in the air, a position which is both extremely common very dangerous for most characters. That is why we usually don’t see him in grand finals.

As the first stage loaded on screen and Luigi appeared both the crowd and commentators were excited and perplexed. Swedish Delight had mentioned about a week before the Smash’N’Splash event that he had been playing Luigi in friendly matches and was seeing favorable results. Unfortunately for him, the good results did not continue against his world-class opponent. The first game was not a promising omen for Swedish as he was 2 stocked by Hungrybox’s signature Jigglypuff.

The second game was moved to Fountain of Dreams in hopes that the slick ground would mix up the feel of their match up, and it worked. Swedish Delight won the second game in the grand finals as Luigi. The game was close, the play looked a bit sloppy, but Swedish Delight had actually taken a game off of the God with a C-tier character.

Unfortunately, that small glimmer of hope was quickly extinguished as HBox went on to win the third game of the set, then sealed his victory in a very controlled, extremely brutal final game. Although many feel that Swedish chose to play Luigi because he felt HBox was unbeatable, it was great to see a top player field one of the lesser seen characters in Melee. 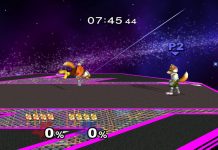