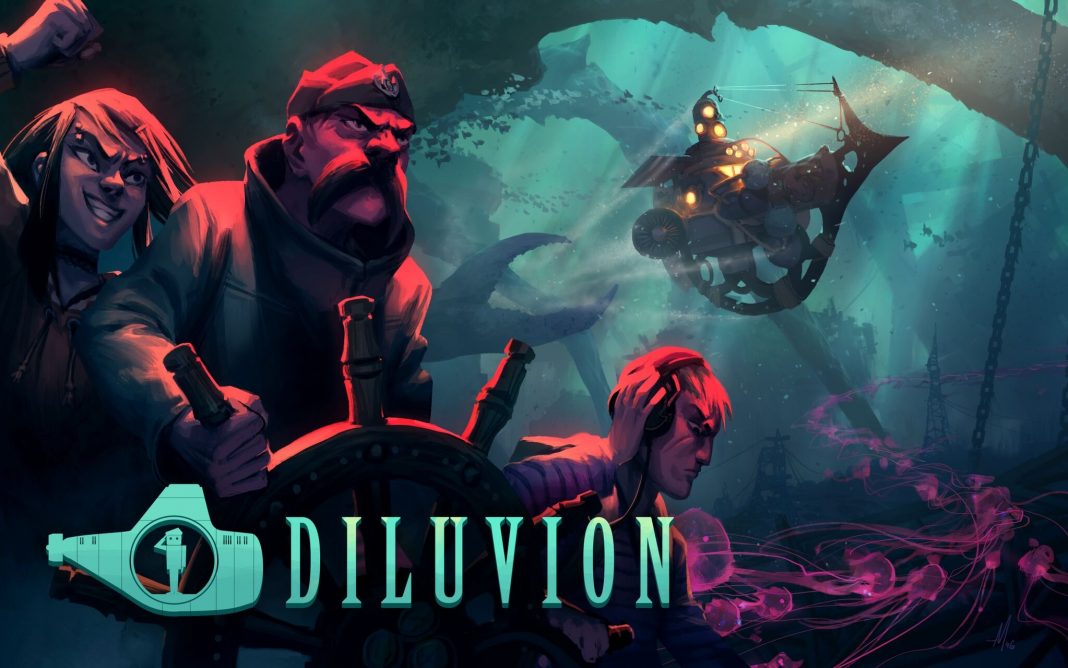 Diluvion is a submarine-based “Jules Verne inspired undersea adventure” developed by Arachnid Games, set for release on February 2nd, 2017. (You can check it out on Steam here.) Diluvion takes place in a distant future where ice has covered the earth and humans have retreated to underwater cities. You are a submarine captain trying to survive in the barren underwater wasteland. You salvage ruins, combat other pilots, and upgrade your ship as you progress. The game has a core survival base, and you must manage your resources if you want to survive.

Survival of the Bravest

Diluvion is interesting in how its resources are spread around. If you want, you can simply go from city to city, avoid unnecessary exploration. You’ll progress through the story, but you definitely won’t get the full experience. Throughout nearly every nook I explored were dozens of new ruins to discover, all with their own goodies. Many of the goodies ended up being the typical generic loot or bullets, but there were some that were always worth the detours.

As you venture out into the sea, enemies become much more plentiful. You have to be careful, because fighting them consumed a lot of bullets, and if you run out, it’s not going to end well. More than once I had to run for safety with pirates on my tail. After that I never went out exploring without a few hundred extra bullets. But the further off the beaten path you go, the more enemies you face, and the tougher they get. You thought one pirate was hard? Try facing two or three at the same time, while another ship shoots torpedoes at you. The fights start to get quite difficult, particularly before you upgrade your guns. That being said, if you manage to defeat the enemies you’ll get access to some of the better loot offered.

The thing that Diluvion most definitely got right is the atmosphere. As you’re exploring the vast ocean, you truly feel like you’re in the future, foraging for survival. There is the perfect mix of uninhabited ocean and interspersed ruins. The civilization is frequent enough, but even it shows the scars of a world torn apart. No matter who you’re talking to, or what you’re doing, Diluvion sucks you into the world it has created. 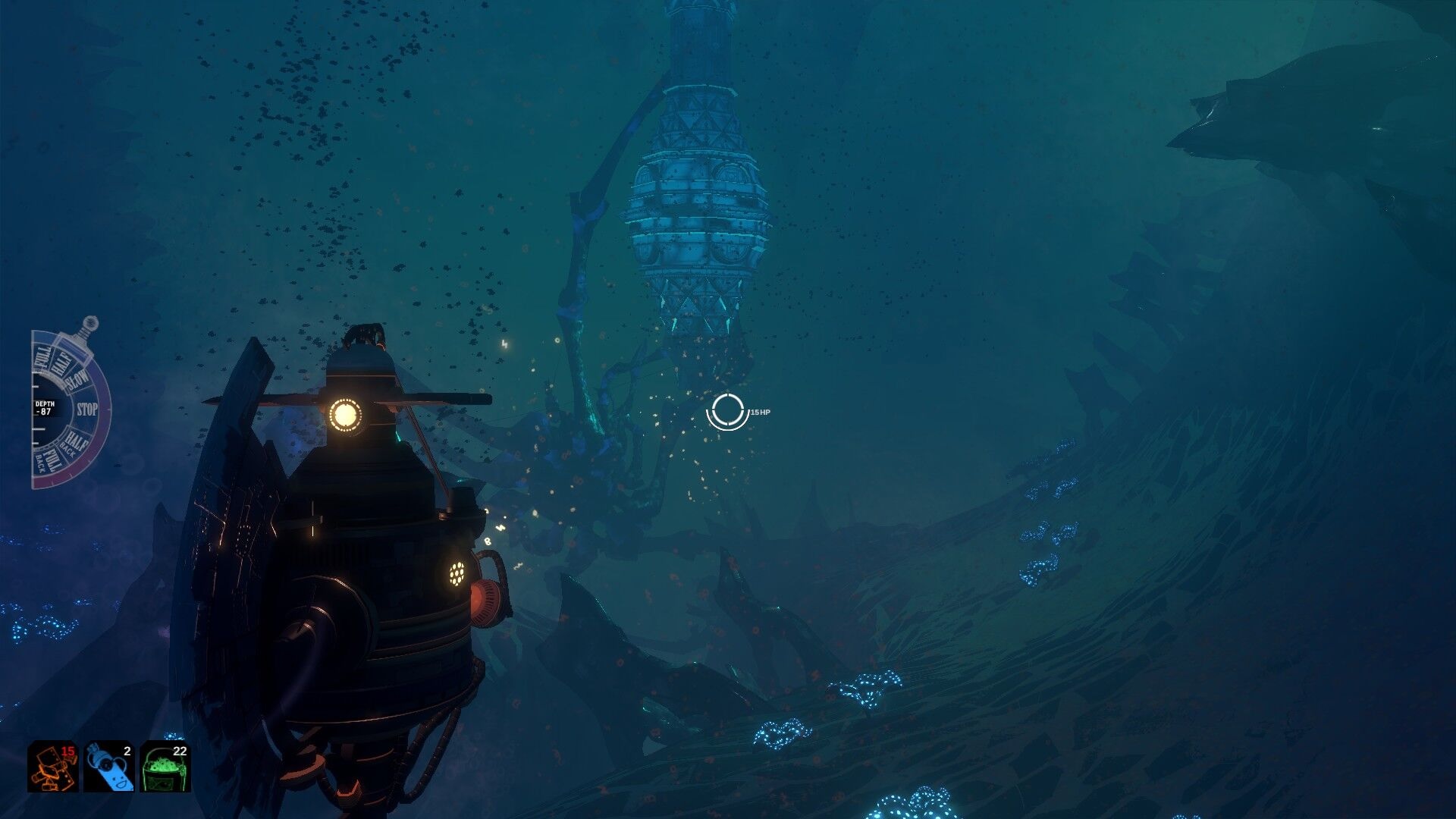 The survivors in Diluvion don’t feel particularly remarkable, for the most part. The women all have similar voices and moods, and the men are split between two or three moods. However, their moods are all very reflective of a species clinging to survival. It may not allow for deep character development, but the mood is well reflected.

The gameplay is a unique experience. You control your submarine manually, like many other vehicle games. But in Diluvion, there are controls for vertical ascent and descent, as well as sharp turns back and forth. It feels almost like a flight simulator, except that you tend to skirt the ocean floor. I definitely had quite a bit of difficulty keeping the ascent and descent keys straight. The movement itself is quite smooth, although it often feels slow.

The combat can be clunky at times, because you have to manage your steering and such while only being allowed to fire directly out of the front of the submarine. This leads to many awkward collisions, or the two of you passing by above and below each other. Because you typically end up steering straight towards your enemy, the combat often ends up being decided largely based on your armour and health. It becomes much harder to dodge bullets when you can’t easily steer sideways. The best method I found was to strafe up and down rather than side to side. The travel time on the guns is also difficult to manage, as speeds are difficult to distinguish underwater. 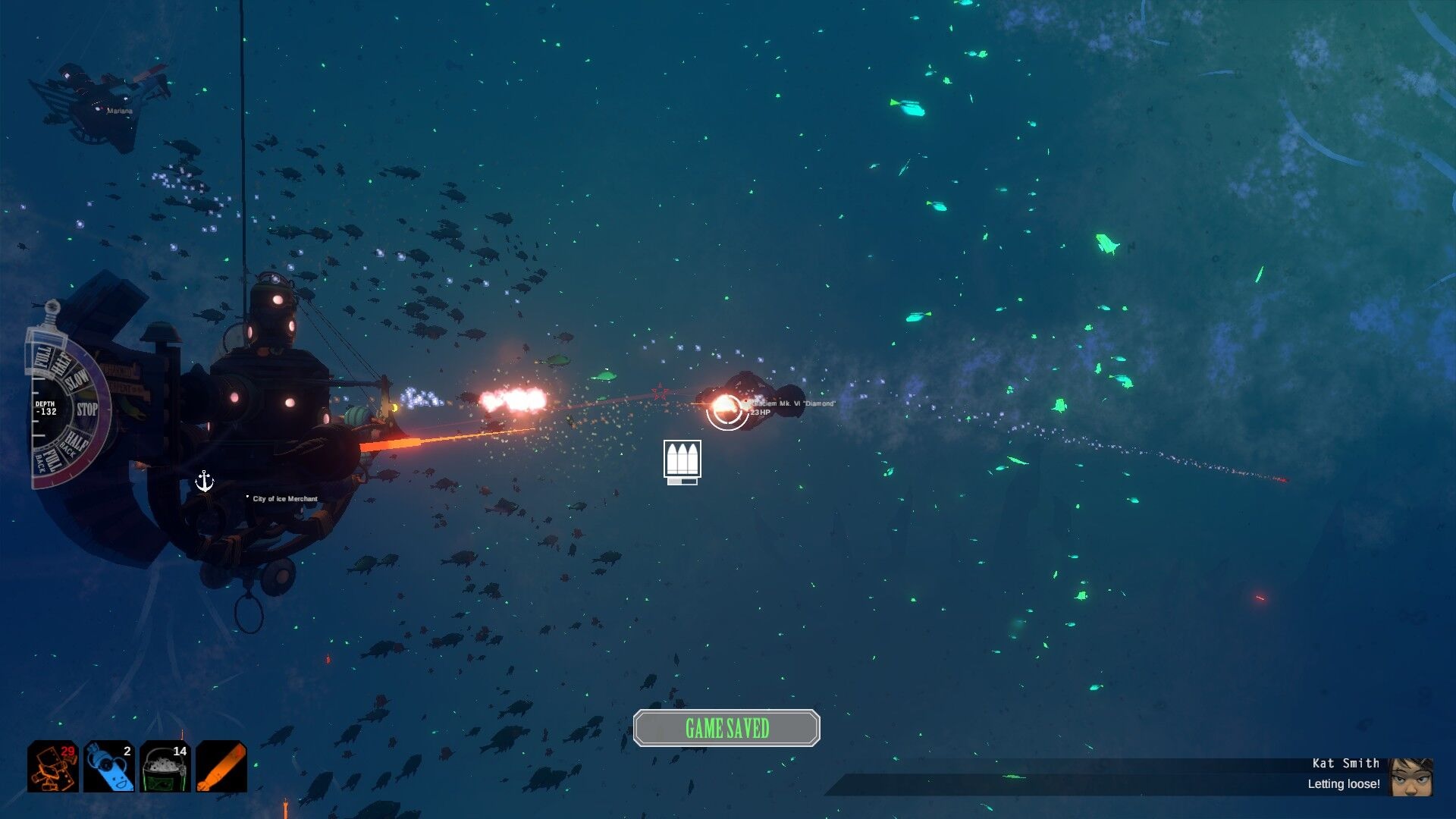 This is my biggest gripe with Diluvion. It’s very unclear where you are meant to be going at any given time. Obviously exploring is fun, but there are specific missions to do, and at some point you want to complete them. This becomes a challenge, as you are often entirely unclear where you should be headed. There is a compass, and sometimes your crew members will note where something is for you to head there. That’s fine, but far more often I found myself wandering around aimlessly, unsure of where to go. When you are at main hubs there are a trail of glowing fish that will light up and lead you to your destination. This kind of guidance is exceptionally useful, except that when you get multiple part missions the fish tend to get confused. They led me to a place I had already cleared more times than I can count, making them often useless.

There is a world map, but it is incredibly small and difficult to navigate. It doesn’t even place your location on it, making it nearly impossible to read for the directionally challenged. For some players all this will be a huge benefit, being able to explore the ocean aimlessly. For me, however, it became frustrating.

Overall, Diluvion is a very enjoyable game. It is particularly good if you are inclined towards survival and exploration games. The atmosphere is one of the best of any game I’ve played, on any console. The controls are solid enough to make you genuinely feel like you are controlling a submarine. There’s enough to do in terms of crew member leveling and exploration that you can keep busy for many hours. The prices in the shops make exploring highly beneficial, and highly promote a leisurely playstyle.

Unfortunately, not everything is good about it. The combat can be difficult and clunky due to strafing being very difficult with forward facing guns. The saves are very far apart and can lead to repeating ten or fifteen minutes per death. The biggest problem, is that navigation is incredibly difficult, and not guided properly. You will often find yourself unsure of where to go and wandering around aimlessly. And maybe that’s your thing!

Even with the negatives, Diluvion is a great game, and one I’d happy recommend to fans of the survival genre. Or the post-apocalyptic genre. Or the exploration genre. Overall I’ll have to give Diluvion a solid 7.5/10. I enjoyed my time with the game quite a bit.

Esports Edition was provided with a copy of Diluvion by the developer. As with all of our game and hardware reviews, our opinions are our own, and positive reviews are only awarded through good gameplay. Check out our Ethics Policy for more information. 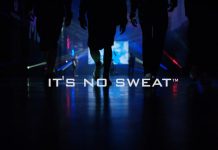