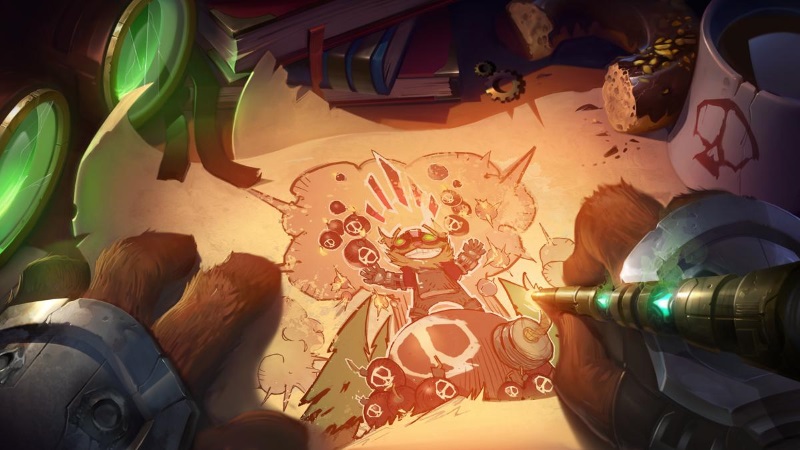 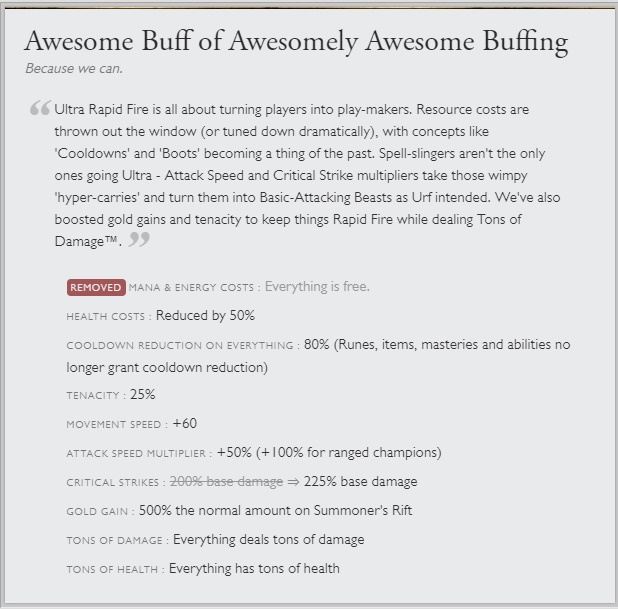 As you can imagine, this buff is capable of creating chaos on Summoner’s Rift.

There are a few global de-buffs that Riot have cooked up to keep things semi-balanced on the battlefields of URF:

There have also been some URF specific balance changes made to combat abusive champions, which you can read about here.

Champions to Try in URF Mode

There are a variety of play styles you can try out in URF, but the ones I have seen enjoy the most success are mobile mages. Look for champions who already have relatively low cooldowns with the normal 40-45% cooldown reduction cap – these champions will virtually have no cooldowns in URF.

LeBlanc is the definition of a mobile assassin mage. With 80% CDR, LeBlanc can use her Distortion (W) and Mimic (R) to dash around the map without ever getting caught. Bursting multiple targets from 100-0 is a real possibility considering how little time it takes for Mimic (R) to come off cooldown.

Although not quite as mobile as LeBlanc, Diana makes up for it with her tankiness earned by spamming Pale Cascade (W) to create shields. She can insta-gib targets too. Normally a Diana player would be in trouble when they miss a Crescent Strike (Q), but with 80% CDR, you’ll be just fine in URF.

Top lane tank Ekko has come and gone. The time is now for full AP Ekko in URF mode. You may be surprised at the insane damage output that comes from an Ekko equipped with a handful of AP items. Thanks to URF, Ekko will be able to Phase Dive (E) almost infinitely. No squishy target is safe against that kind of all in.

Whether you decide to build AP or AD Ezreal, that’s up to you. Either way you’re going to be able to spam Mystic Shot (Q) over and over as soon as the animation finishes. Ezreal is the URF kite god. It’s difficult to be put in a bad situation with 80% CDR on Arcane Shift (E). The only threat to an URF Ezreal is champions with burst and gap closers. Beware the Ekko/LeBlanc!

Fizz is almost always perma-banned in URF. Here’s what his typical URF combo looks like: Urchin Strike (Q), Seastone Trident (W), Playful/Tricker (E). Now repeat that over and over again, and make note that every time Fizz uses Playful/Trickster (E) he’s invulnerable. It is difficult to kill an URF’d up Fizz. The best strategy is to ban him in champion select.

Not a mobile assassin mage, but if you want to break out a support champion in URF, Sona is probably your best bet. You might need a backup keyboard, though. Q-W-E-Q-W-E-Q-W-E-R-Q-W-E. This is your life as a Sona player in URF mode. Don’t get it twisted, you do a lot of damage too. Just don’t get busted before you can get it off.

Another solid alternative to AP assassins, Pantheon offers constant DPS from Spear Shot (Q) and frequent crowd control from Aegis of Zeonia (W). Where Pantheon finds problems is closing the gap. You’re probably not going to land a stun on an Ezreal. Like, ever.

Look for URF to come out sometime in the afternoon today (Friday, April 22nd) and try out these champions! Good luck, and have fun. 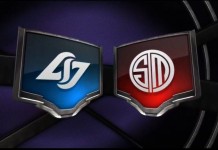