The 2016 preseason is in full swing with a laundry list of new champion changes as well as new items. Many of us are still getting used to the changes and Riot has their work cut out to balance those changes. While casual players gradually work through the changes, the professionals and aspiring professionals set their eyes to the 2016 season. Thankfully they do not have to look too far. The 12th of December marks the start of the Challenger Series Qualifiers (CSQ) and while it marks the start of the 2016 season it means much more to those competing. To them, it’s a chance to compete in the pro circuit.

In years past, by mid December, Riot Games hosted the Challenger Series (CS) to see who will get a spot in the North American League Championship Series (NA LCS). In those past years you and a few friends created a team of five and competed until your team achieved the rank of Challenger Tier. Riot then selected teams to compete in CS where the winners got placed into the NA LCS. This year Riot decided to implement a new system, the Qualifiers. The changes require players to have a minimum Solo Queue rank of Diamond 3 versus last year where the ranked teams were gathered from Challenger Tier. Another change dictates that eligible teams for CSQ must form or join organizations capable of meeting all the expectations and responsibilities of an NA LCS team.

These changes do not only impact the NA LCS but the European League Championship Series (EU LCS) as well. Riot is rewarding winners from three ESL tournament locations (Meisterschaft, Germany; Mistrzostwa, Poland; División de Honor) with a spot in CSQ. The EU CSQ attempts to invoke a sense of national pride for the players and fans that follow them. In addition to that, Riot is hoping to strengthen the path to pro circuits.

What does this mean for the competing teams?

Each team that competes in the CSQ is really competing for a spot in Challenger Series. Winning their side of the bracket (which can be viewed at League of Legends Battlegrounds) secures their spot for the upcoming CS. Riot feels that this system allows a greater number of players resulting in more teams to able compete. By the time the bracket released in the early hours of December 10th, thirty teams are slotted to compete. Only two teams have received a bye but the remaining teams will clash this Saturday, December 12th at 3:00 PM PST.

As of the 10th of December Riot neglected to mention how fans can watch their favorite teams or a friends team compete. Riot typically broadcasts tournaments over their website directly or on Twitch so those would both be a good place to start. Enjoy the games and good luck to all the competitors.

Previous articlePoppy in the Preseason: The Most Overdue Rework
Next articleAll-Stars 2015 Los Angeles: What You Need to Know 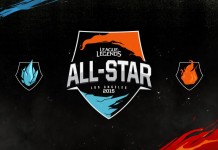