Taunt Warrior is a new Hearthstone deck archetype, spawned by Blizzard’s Journey to Un’Goro expansion. While the deck itself is new, it’s not exactly hard to see why these cards work well together–once you finish the new Warrior Quest by playing seven minions with Taunt, you’re rewarded with a 4/2 weapon called Sulfuras that makes your hero power deal eight damage. Technically, Taunt Warrior could be considered a variation on Control Warrior since there’s a lot of big bodies getting played and the deck offers a really solid win condition. If Control Warrior doesn’t tickle your fancy, Taunt Warrior might be a more suitable Hearthstone deck for you to pilot. You don’t have to make nearly as many difficult decisions with Taunt Warrior as you do with Control Warrior, and this is at least partially because the former fits neatly into Hearthstone’s play-on-curve meta. You draw your taunts, play them as fast as you can, and use them to win. Seriously, Taunt Warrior is about as simple as it gets, but if you want to understand some of the more nuanced aspects of using this deck, you’re in the right place.

On the right, you can see the Taunt Warrior decklist they’re running at Tempo Storm. I’ve experimented with it quite a lot myself, and it’s definitely solid. Some of the cards you might expect to see are curiously absent, such as Bloodhoof Brave, but at the same time, there aren’t any obvious candidates for removal. You should test out the standard Taunt Warrior decklist to get started and make alterations as you figure out which taunts you like best.

Taunt Warrior really is all about playing your taunts when you have them, but players must be mindful about conserving their removal tools. Now, you do have enough removal to take out everything your opponent plays several times over. But don’t blow your load just because you can–try to bait your opponent into using a big Brawl, and use Taunts to force them to waste a turn clearing. In the current fast meta, it’s easy to get full board clears with cards like Whirlwind and Sleep with the Fishes.

The winning strategy for Taunt Warrior is all about one thing: staying alive. Use minions as digital meat-shields to stay alive. Use your removals to clear the board and stay alive. Stay alive long enough, and you’ll be able to kill your opponent.

You are presented with the occasional tough choice about when you should play Sulfuras. In many cases, you’ll complete your Quest and be able to play Sulfuras on the same turn, but this is rarely the correct play. Unless you can use your hero power the same turn, playing the weapon isn’t nearly as useful as you might think because it’s more helpful to have the two armour instead. By waiting a turn, you can armor up, play Sulfuras, and use your hero power again. In other words, you’re gaining four armor just for being patient and holding off until the next turn. You may have to postpone playing Sulfuras to clear more. If you’re looking for consistency, Brawl + Sulfuras + Hero Power is always a powerful combination. Your opponent will be left with a maximum of one minion, you’ll have a four attack weapon, and, on top of that, an additional eight damage to dish out. It’s pretty hard for people to come back from that.

One of the reasons why Taunt Warrior has proven to be a popular addition to Journey to Un’Goro’s meta is because the deck does well in almost every matchup. Aggro decks aren’t an issue since you’ve got taunts and AoE removal options. In fact, against Aggro you’ll rarely have to actually play Sulfuras. You can just stall the game until your opponent realizes they can’t win and concedes. The only fast deck that poses a serious threat to Taunt Warrior is the popular Rogue Quest deck. If Rogue can finish the Quest early, you run out of removals before they run out of minions, especially since the Whirlwind + Sleep with the Fishes combo can’t kill them. There isn’t much room for strategical maneuvering in this matchup–if you’re up against Rogue with a Taunt Warrior deck, all you can do is hope they take a while to complete their Quest.

As for combo decks, Taunt Warrior is heavily favored in slow matchups. You can easily beat slow Warlocks, Priests, and Paladins. However, Mages can be very difficult, and both variants of the new Freeze Mage decks pack a lot of damage. With the loss of Justicar, Control Warrior is no longer the armor generating machine he once was. In Mage matchups, I strongly suggest you play behind curve in order to stack up as much armour as possible. Taunt Warrior’s other option for dealing with slow decks is to pressure incredibly hard, and this is often the best choice when you’ve got a strong early hand. You want to force your opponent to waste removal on your minions, or build enough armor so that they can’t kill you. It’s not easy, but it’s not impossible. If you’re against the Mage Quest deck, it’s crucial to pressure as hard as possible. Remember, Mage has an infinite damage combo, so your health doesn’t matter. 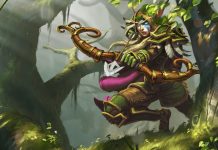