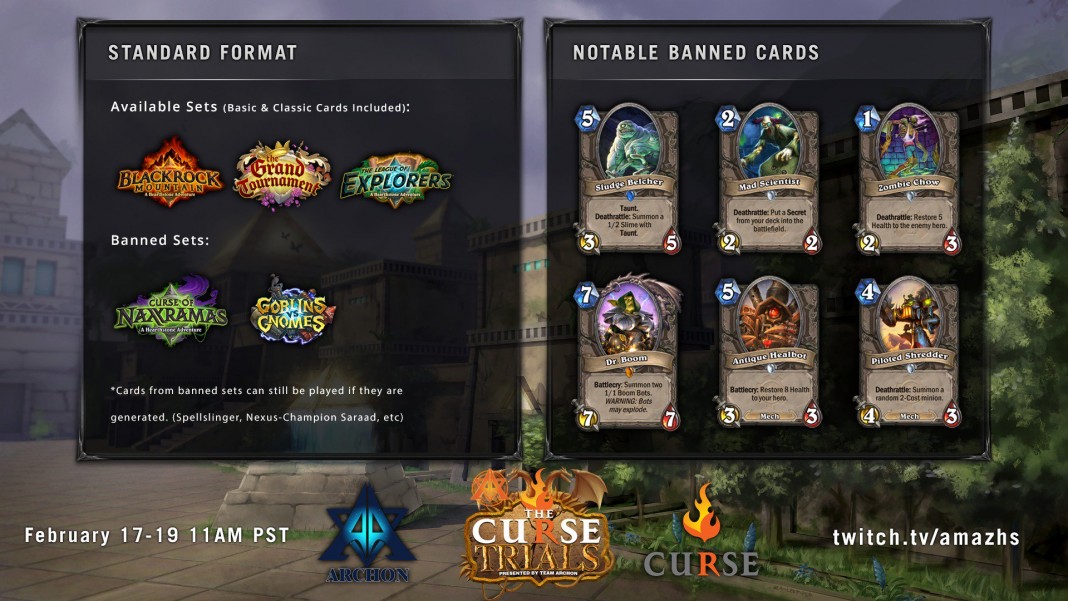 The Curse Trials are a tournament put on by Archon and sponsored by Curse, boasting a $30,000 prize pool. It was inspired by the announcement of the upcoming Standard format. The rules are simple, it’s a typical best of five tournament, but no player is allowed to use Naxxramas or Goblins vs. Gnomes cards – the cards that will be removed from Standard when it releases. The tournament boasts sixteen professional players who have all been invited to play under these interesting conditions.

The tournament is split into two groups. Group B holds RDU, Firebat, Savjz, Kolento, Ostkaka, SuperJJ, Lifecoach, and Zalae. There is a winner and loser’s bracket, so each player is given at least two chances before they are eliminated. Here are the current Group B finalists:

Winner’s Bracket Round One

The first match was RDU against Firebat. RDU plays for team G2 Esports and brought Dragon Warrior, Dragon Priest, and Midrange Druid. Firebat recently left Team Archon and currently does not have a team. He brought Aggro Paladin, Aggro Shaman, and Tempo Mage. Firebat is the only one to bring Paladin to the tournament, and the only one from Group B who does not have Druid. Unfortunately for him, even though he managed to snag a win against RDU’s Druid, his unconventional decks didn’t last and RDU took the series 3-1.

The second match had Savjz against Kolento. Savjz plays for Team Liquid and brought Midrange Druid, Aggro Shaman, and Dragon Priest. Kolento plays for team Cloud9 and brought Midrange Hunter, Midrange Druid, and a Rogue variant. Kolento is the only one to bring Hunter to the tournament. The match was a close one, going to game five, but unfortunately Kolento’s internet went out and he forfeited game five, giving Savjz the match 3-2.

The third match was Ostkaka against SuperJJ. Ostkaka plays for team Na’Vi while SuperJJ has no team. Their lineups were virtually identical with both players bringing Shaman, Rogue, and Druid, but Ostkaka’s Shaman was the Aggro variant while SuperJJ’s Shaman was a more midrange variant. Ostkaka also managed an extreme run of luck, drawing the exact cards he needed several times in order to win while SuperJJ was poised to win the next turn. Ostkaka managed to ride his incredible draws and take the match 3-0.

The final match of round one was Lifecoach against Zalae. Lifecoach plays for team G2 Esports and brought Midrange Druid, Dragon Warrior, and Dragon Priest. Zalae plays for Team Archon and brought Midrange Druid, Aggro Shaman, and an Oil variant of Rogue. This match held the most interesting game seen at a tournament in a long time. Zalae’s Aggro Shaman against Lifecoach’s Dragon Priest. Zalae decided to simply not play anything for the first three turns of the game, choosing instead to let his turns time out. Lifecoach didn’t take any risks and played very passively, thinking of all the ways he could lose. However, Zalae managed a big board wipe and flooded the board with his own minions, and with an incredible final draw, managed to burst Lifecoach from twenty-five to zero in a single turn, taking the game in an incredible turn of events. However, Lifecoach wasn’t ready to go down without a fight and managed to reverse sweep the match, going from 0-2 to 3-2 for victory.

Round two of the winner’s bracket started with Savjz against RDU. It was a particularly uneventful series with Savjz taking it 3-1, RDU only claiming a win with Druid. The second match was Ostkaka against Lifecoach, and despite Ostkaka taking a two game lead, Lifecoach once again managed to reverse sweep and win the match to move on to the finals.

In the loser’s bracket round one, Firebat defeated Kolento 3-2 and SuperJJ defeated Zalae 3-1 in a set of games that were not broadcast. Kolento and Zalae were both eliminated from the tournament.

Round two began with Firebat against Ostkaka. This match was a clash of champions, as Firebat won the 2014 World Cup and Ostkaka won the 2015 World Cup. In game two, Ostkaka managed to play a turn one Emperor Thaurisan which Firebat was unable to deal with for several turns. Despite Firebat making a play for the board, Ostkaka was able to win with a discounted Force of Nature + Savage Roar play on turn six for lethal. The match managed to make it all the way to the fifth game, where Ostkaka took a huge risk and played a massive 12/12 Edwin Van Cleef. Firebat couldn’t deal with it and it sealed the game, meaning Ostkaka advances to the semifinals while Firebat is eliminated.

The second match was between SuperJJ and RDU. This was another very uneventful match, and unfortunately for RDU he was once again on the receiving end, going 0-3 to end his run. SuperJJ will advance to the semifinals while RDU is eliminated.

The semifinal matches will be played as the tournament progresses. It will resume with Savjz against Lifecoach in the Winner’s Bracket and Ostkaka against SuperJJ in the loser’s bracket. They will play alongside the semifinalists from Group A, Trump, StrifeCro, Amnesiac, and Thijs.

As the tournament has progressed, it has certainly solidified Druid and Shaman’s positions at the top of the class ladder within this format. Rogue has also proven itself to be very strong. Both Dragon Warrior and Dragon Priest performed far better today than they did yesterday, giving some hope for the archetypes. Surprisingly we still did not see another Warlock to follow Trump’s success from Group A. We did see both Hunter and Paladin today, although neither performed particularly strongly. 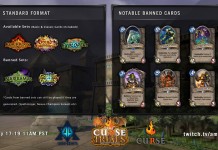