Valve’s boldest production choice at TI7 was the addition of interviews with players just moments after they had been eliminated from the tournament. In traditional sports, loser interviews are very common — you’ll often see them included in coverage of the National Football League (NFL) or the Major League Baseball (MLB). Interviewing defeated teams is a great way to humanize players, especially in esports. Too often we attribute godlike qualities to professional players, and in the process, we forget that they’re people.

One of the biggest shortcomings in esports is the industry’s inability to portray players with authenticity and compassion, and off-the-cuff interviews are one way to fix this. At the same time, players are devastated when they lose. It’s hard to watch. But the interviews that Machine produced at TI7 were one of the most potent reminders in recent memory that esports professionals aren’t automatons. They’re people, and just like you and I, they have powerful and sometimes complicated emotions. The losers interviews at TI7 were raw. They were real.

Yet my feelings about losers interviews remain complicated. On one hand, I’m grateful that fans get a peek behind the scenes. However, I’m a bit hesitant to embrace the exit interviews. Our industry doesn’t have the same kind of support systems in place as traditional sporting leagues. Losing teams in the NFL are expected to do interviews with various news outlets, but they’re given time to shower, take a deep breath, and collect themselves before appearing in front of the cameras.

After a disappointing loss at Super Bowl 50, NFL player Cam Newton walked out of his postgame interview. Newton’s body language tells us everything his words don’t: he would rather be anywhere else in the world than sitting at that desk surrounded by a small army of microphones, cameras, and chattering reporters.

Afterwards, Ron Rivera, coach of the Carolina Panthers, acknowledged “how important it is to [capture] raw emotion,” but expressed his hope that journalists and reporters would acknowledge that “it’s a difficult thing to do after a loss.”

Our industry expects a lot from players who are, for the most part, very young. We expect them to have the skills necessary to negotiate fair contracts with organizations, gracefully acclimate to the pressure of unexpected fame, and continue to perform at a high level while under constant scrutiny.

For the sake of the players, it’s important that they’re given at least some control over how they express themselves to their fans, viewers, and potential sponsors. I want to see the human side of professional players, but we need to be mindful of how–and when–they’re forced into the spotlight. At an event like TI, the most prestigious esports event of the year, losing isn’t just unfortunate. It’s soul-crushing. Give the players time to grieve and regroup before they’re put in front of the cameras. 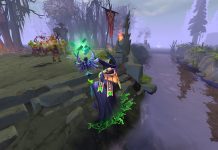