General Stephen Draper -
-6.8k
Path of Exile Shaping Before you start shaping your Path of Exile Atlas, we suggest you read our introduction to the Atlas. Once you have...
Flickr user robscomputer

I never thought I’d say this, but where I used to have tournament fatigue, I now instead wish there were more Dota tournaments going on right now. One of the downsides of the Majors system is the lull period in between big tournaments. I’ve had literally nothing to watch except the crumbling of rosters.

Some people are really into watching streamers. I’ve always been on and off with streamers, where I’ll watch them for a few months and then lose interest, and come back again. During the down time between big tournaments, Dota 2 streamers are a good way to get your fix.

If you’re looking for the most popular Dota streamers (at least in the western scene), look no further than SingSing.

Entertaining commentary, dry humor, SingSing has it all.

If you like SingSing, you’ll probably enjoy AdmiralBulldog, formerly of Alliance.

AdmiralBulldog is famous for his Nature’s Prophet, but I personally think this clip is a golden moment.

I’d be lax if I didn’t include Arteezy, whose recent return to Twitch streaming generated about fifty threads on Reddit.

Some Dota 2 Streamers you haven’t heard of

Chances are if you’re reading this article, you’ve heard of at least one of the above streamers. So who are some other ones you should watch?

Must see – pissing off a Rubick player one not skilled ability at a time:

This video was on the top of the Dota2 subreddit today. Capitalist and company baited out a Rubick pick with Enigma and refused to skill abilities, resulting in Rubick being mostly useless. Capitalist is a fairly high MMR caster, and his stream is usually pretty fun. Blitz, the Luna in this video, is also a well known streamer:

He’s known for Storm Spirit, but his stream is usually pretty informative too.

If learning > memeing, Merlini might be the streamer for you.

Merlini makes awesome instructional videos. Even though he plays at a much higher level than I, I still feel like I get a lot out of watching his stream.

Dota 2 Streamers can be a source of great (or terrible) music as well – EternalEnvy is known for his impressive anime soundtrack library. I started listening to Lemaitre after watching s4 stream for a few weeks.

Next time you’re feeling down about no Dota tournaments to watch, and you’re considering watching VODs of TI5 for the 10th time, check out one of these streamers instead!

Previous articleThe Buffs We Need in 6.89
Next articleHero Comparisons between Dota and League, HoN, HotS 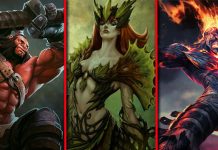