Dota 2 Eugene Torubalko -
-441
What to Expect for the Spring 2021 Dota Plus Update Dota Plus is a premium monthly subscription service in Dota 2. It comes with many...
Via www.steamcommunity.com

Anyone who knows anything about MOBAs like Dota 2 will appreciate that for many players it’s not just about winning. It’s looking good whilst styling over your opponents that really counts. Decking your hero out in your favourite cosmetics is an important part of personalising the game and letting your enemies know that your Juggernaut is a bit more special than theirs. Dota fashion is, of course, largely a matter of taste, but there are some timeless sets that we feel deserve some recognition – so let’s check out our favourites.

Armor of the Stalwart Soul

Armor of the Stalwart Soul is one of those sets that just looks miles better than the base model without changing too much. It gives Omniknight a battle hardened, warrior-like look that can only be improved by picking up his immortal weapon, Adoring Wingfall.

A popular hero for cosmetics, Snowstorm Huntress gives Mirana a totally unique style that looks particularly fantastic when the map is in winter mode. If you’ve got this set you better make sure you’re landing those arrows because people will expect you to know you’re stuff.

Wicked Succubus is one of those old Dota sets, with alternative styles, and we love the different ways you can play around with them. Elegant, enticing, yet utterly deadly, keen QoP players might want to check this one out.

There have been quite a few sets for Centaur lately but if you like your Warrunner looking formidable and classy then this Mythical is a good way to go. It comes with a custom ability icon and animation for Double-edge too, so it’s definitely one to look at.

This has got to be one of the most distinctive Dota 2 sets there is. With a bunch of custom icons and spell effects, it turns Juggernaut into a red demon and even if you don’t want the whole set you’ll probably want some part of it.

“Come at me bro” is what this set says to your opponents. The offhand shield really helps Cry of the Battlehawk give Sven that tanky, impenetrable look he deserves and that helm is definitely one of the coolest cosmetics in the game.

So what’s our pick from the latest, Warhammer themed treasure? The Grand Witch Hunter Templar set for Kunkka has got to be our favourite. It’s a rare, so it’s hard to get at the moment, but we’ve already seen Attacker the famous Kunkka player using it on his stream. Clearly he was stopping at nothing to get his hands on it. 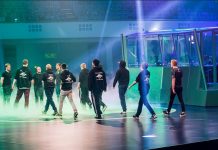