Hearthstone Eugene Torubalko -
-415
Hearthstone players stuck at ranks 5 to 10 sometimes cannot understand what exactly is going wrong. They refuse to accept their misplays...
Via wallpaperfolder.com

The Many Faces of Dota Players

With hundreds of thousands of Dota players across the world it’s amazing how frequently the same old characters crop up in our games. From the players with terrible attitudes who make you want to abandon to the consummate team mates who keep everyone focused, every game you play can be a complete lottery.

There are plenty of players out there who pretty much play mid exclusively and they don’t like it if things don’t go their way. Whilst they might not always open with “Mid or feed”, it’s pretty much implied when they automatically position their hero icon mid and say “I pick last”. You can guarantee they’re going to want some pooled tangos, they’ll probably ping more than the rest of your team put together, and if they get ganked a couple of times they’ll be the first player to type “GG” in all chat. Some of these players are pretty good though, so if you keep them happy they might just win you the game.

“Why do I have to play support every game?” should give you the signal right away – these Dota players are completely tilted. Game after game they try their best to keep their team mates alive by buying wards, tanking ganks, upgrading couriers and all the rest but what do they get in return? Nothing but criticism every time their carry gets caught out of position. Once upon a time they were positive, chatty, and encouraged smoke ganks and other cooperative team activities but now all they can do is ping every time their carry misses a last hit. One day they will get to play carry. One day soon. And then they’ll show everyone.

“Why did you guys fight without me?” That’s right, they were so busy happily farming away that they missed the big, game deciding team fight. Classic. Some people just don’t seem to grasp the concept of Dota as a PvP game – for them it’s all about killing creeps, getting six-slotted and then knocking down a few buildings around about the hour mark. Whilst you’ve got to appreciate that for many carries it is much more useful for them to farm during the early game, sometimes they’re clearly just misreading how the game is going and need to start contributing. You need to actively talk to these guys to keep them part of the team because otherwise they’ll stay in farm mode until your Ancient has gone down.

The Guy With the Strat

Whether it works or not, everyone enjoys a cheesy strat and it is fun to have a team with a game plan. Level one Roshan? Minion armies? With the right kind of attitude anything can work. These types of players will likely tell you which heroes to pick, where to lane, when to push, which can be a tad irritating, but when you pull off the big combos it will all be worth it. 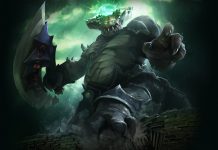