As of 8:00 pm EST on April 27th, Overwatch’s ninth season came to a close. It was an interesting one – the (not so) new map, Blizzard World, was released into competitive play properly, and Moira, D.va and Lucio solidified their places at the very top of the metabomb tier list.

However, one of the biggest changes that I previously anticipated happening – The competitive release of Brigitte in Season 9 – was actually pushed out to Season 10. That time is just around the corner. Starting April 30 at 8:00 pm EST, it will be time to get out the mace and start swinging – or, alternatively, to prepare to deal with a mace-swinging Brigitte meta.

In this article, we’re going to jump in and see how best to handle just that!

Death of the Dive?

One of the biggest things to watch out for in Season 10 is going to be the larger state of the meta – not just which characters are considered good, but rather which overarching strategies. For a very long time, the “Dive” Meta has been exceptionally popular and effective at all levels of competitive play. After all, taking some of the most mobile characters in the game and jumping on top of the most vulnerable characters on the enemy team at once is a pretty effective way of winning a fight.

What happens, though, when there’s a character out there who can quite literally knock diving characters away, stun them, and make their squishy teammates substantially less squishy?

Well, that’s the question, isn’t it? Brigitte has been out in the Quick Play world for some time now, but as we all know, the competitive world is a very different place. Michael Chu and Geoff Goodman, two of the game’s most senior designers, recently did an interview where they mentioned that one of their intentions with Brigitte was to disrupt the current dive meta and, for lack of a better term, “shake things up”.

It’s pretty rare within the bounds of quick play that you end up getting a well-coordinated game that adheres to conventional ‘meta’ standards (at least in my experience) so for now, it’s difficult to tell whether or not they’ll achieve their goal here.

However, this brings us to the first and most important tip I’ll bring you today: Consider waiting a few days before jumping directly into your placements on April 30th. Although I’m often a proponent of diving straight in to your placement matches, this season will probably start with a healthy period of nobody knowing how Brigitte quite fits, but a lot of people being enthusiastic about playing her.

It is often the case (at least anecdotally) in quick play that players try to use Brigitte as a front-line DPS character. In the generally more disorganized setting of Quick Play, that can often work fine. In the higher levels of Competitive play, though, it’s quite likely that this kind of play will turn a fight quickly into a 5v6.

Because your teammates (and you!) will probably need a period of adjustment to figure out both how to play and how to play with Brigitte in a competitive setting, you should expect a few days at the beginning of the season to involve some pretty rough games all around.

Anticipate the return of Deathball

If the Overwatch designers were right in their assessment of Brigitte, it’s likely that the Dive meta will be at least partially reduced in effectiveness this season, and with that will almost certainly come the rise of the Deathball composition again.

Although there’s flexibility to a ‘standard Deathball’, you can expect to see a team involving Reinhardt, Brigitte, Moira, Zarya, and two compatible DPS players fairly often. The DPS may look like a McCree and a Soldier – two reliable characters that can benefit from the team’s shields and proximity healing – or characters like Junkrat, who can be leveraged to break down the opposing team’s shield setup.

With that in mind, there’s a few things you can do to prepare and maximize your odds of doing well in your placements games. First of all, if you’re not comfortable on any of the characters mentioned above, start practicing! Reinhardts will be in high demand this season, as will Zaryas, and skilled tank players can really make the difference in a team’s ability to hold position and push the objectives. Moira and Brigitte are just a joy to play (in my opinion), so they’re worth experiencing anyhow, but both of them have surprising power to make plays and turn a fight from the support role.

If playing in a Deathball comp isn’t really your thing, the second thing you can do is to start working on your anti-deathball characters. One of my personal favorites is Reaper, who I wrote a short guide about quite recently. His power to two-shot (or even one-shot) most of the cast is incredible, and against a team with fat targets and a lot of healing-over-time effects, exceptionally high burst damage is just what the doctor ordered.

Other great picks are Junkrat or Pharah (to burst down shields and punish people for staying close together), or even Widowmaker (to negate the armor and healing output of a sustain team with insta-kills). After all, as a wise player once said: “if you can’t join them, beat them”…? Something like that.

No matter what impact Brigitte will ultimately have on the meta, this coming season is bound to be unique, and a lot of things will change. How are you planning to prepare for the new season?

Previous articleThe Easiest Overwatch Heroes for Beginners
Next articleReaper: The Solution to the Tank Meta 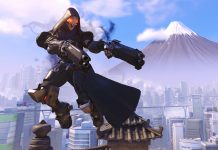