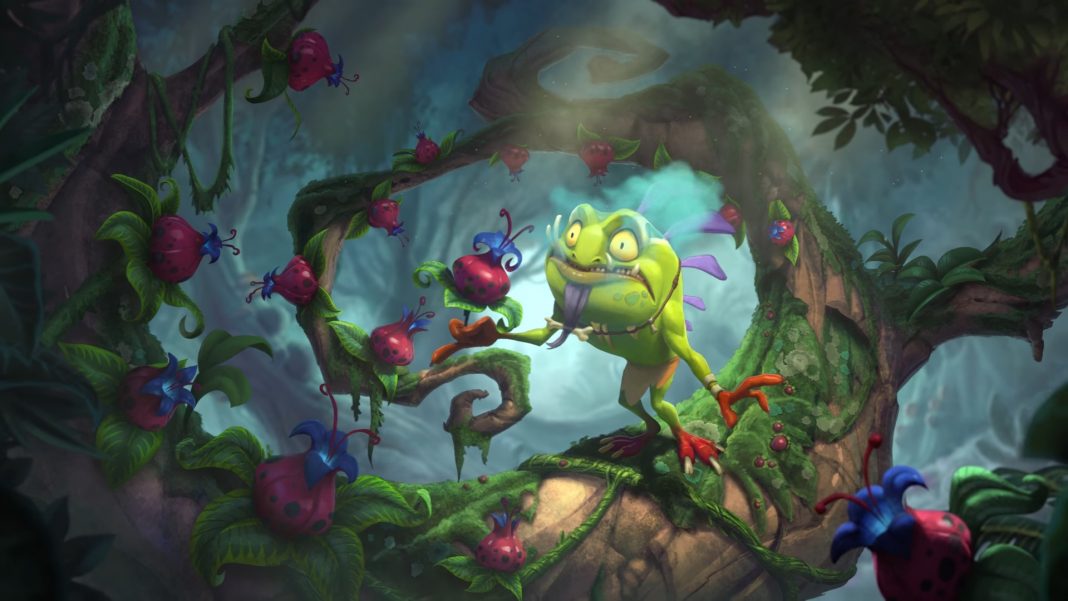 The entire Journey to Un’Goro expansion has finally been revealed, and we’ve even got a release date on our hands: April 6th. Expect to see a ton of content over the next couple weeks, friends. Today, we’re going to cover the final two neutral legendaries in Journey to Un’goro: Spiritsinger Umbra and The Voraxx have joined the crew, sporting awesome art and interesting abilities. One thing is clear: the neutral legendaries in Journey to Un’Goro are far better than what we’re used to seeing in expansions.

Spiritsinger Umbra is a four mana 3/4 that turns Deathrattles into Battlecries. When you play a Deathrattle minion with Spiritsinger in play, their Deathrattle will go off. This does not remove the Deathrattle however, meaning that effect will trigger twice. Once when the minion enters, once when it leaves. Which is pretty freaking crazy! 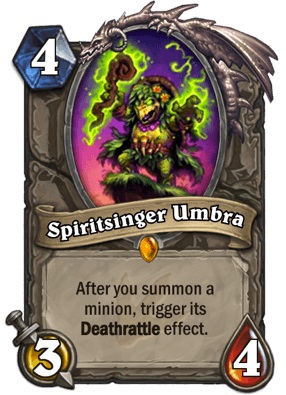 Spiritsinger Umbra is an obvious successor to Brann Bronzebeard and Baron Rivendare, but that doesn’t make it any less cool. Deathrattles are typically stronger than Battlecries, so it makes sense that Spiritsinger costs more than Brann. It’s important to note, however, that the minions still only die once, so only one copy would return when combined with N’Zoth. But the possibilities for Spiritsinger Umbra are incredible. It’s unfortunate that Sylvanas is rotating out of Standard, since there’s an obvious combo there–of course, this might explain why she’s leaving.

Spiritsinger should fit perfectly into any Deathrattle deck. Cairne Bloodhoof will summon a 4/5 on entry. Devilsaur Egg summons a 5/5. If you play Pyros, you’ve now got two in your hand. It can even be used with Crystalline Oracle to snag a free card. The possibilities are nearly endless. I’ve always been a fan of the Deathrattle mechanic, and I can’t wait to build decks around Spiritsinger Umbra.

Only two of the new legendaries have Deathrattle abilities: Pyros, and Sherazin. Spiritsinger works great with Pyros, but counters Sherazin by putting the minion to sleep. There are plenty of non-legendary cards with Deathrattles to account for this absence, however, so I’m not worried. 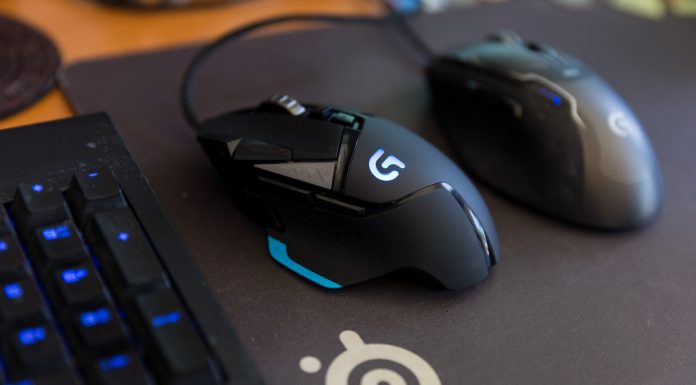 The Voraxx is not nearly as universal as Spiritsinger, but it’s still quite interesting. The card is a four mana 3/3, with an effect rather similar to Djinni of Zephyrs. Since the Djinni is rotating, it seems only right that buff decks get a cool combo card, and The Voraxx might be just what we’re looking for. Whenever you target The Voraxx with a spell, you summon a 1/1 and cast another copy of the spell on it. 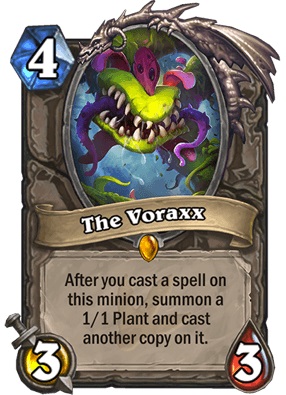 The most obvious synergy here is with the new Paladin Quest, which requires you to play seven spells. While I still need to wait until April 6th to confirm my suspicions, I’m fairly certain targeting The Voraxx with a spell would count as two–feel free to correct me if I’m wrong. The Paladin buffs are also quite strong: Blessing of Kings gives +4/+4 and makes a 5/5 for four mana! Other than that, The Voraxx has basic synergy with other classes, primarily Priest. Suddenly Power Word: Shield is a one mana card that gives two health, makes a 1/3, and draws two cards. The uses are fairly limited, but there’s a lot of potential to use The Voraxx for small value plays.

Unfortunately the only spell in the game that properly gave Charge was nerfed recently, which means you won’t be pulling off any neat Charging plays with an army of plants. I think The Voraxx is really cool, but, to be honest, the effect seems incredibly niche. I’ll be surprised if he’s played as much more than a joke in fun decks. It’s definitely the weakest of the neutral legendaries, but we’re looking forward to seeing what happens when the community gets their hands on it.

What do you make of the two new neutral legendaries? Stay tuned throughout all of April for more Hearthstone analysis–we’ll be discussing cards, quests, and all that good stuff, so follow us on Twitter if you’re looking to satisfy that Hearthstone fix. 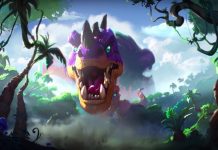