There’s been a recent surge in popularity for Hearthstone’s water decks. If you’re wondering why they’re called water decks, there’s a simple explanation: Murlocs. Water decks typically include Finja, two Bluegill Warriors, and two Murloc Warleaders. It’s the classic Murloc combo, but without Anyfin to back it up. This combination has shown up in a variety of decks since Finja was released, but the recent uptick in popularity for water decks tells us that we should expect to see a lot more Murlocs over the coming months.

At the same time that water decks are stepping into the spotlight, Aggro Rogue decks are experiencing a similar renaissance Over the past two weeks, Aggro Rogue has appeared a surprising amount in high legend ladder games. It only makes sense that many players would experiment with Aggro Rogue and water decks at the same time, since Water Rogue is the most popular of the water decks. It helps that Aggro Rogue isn’t as dedicated to a class or playstyle archetype as other decks like Pirate Warriors. Aggro Rogue’s flexibility allows for greater adaptation, and if the increase in water decks is any indication, players are making the most out of it.

Three variants of Aggro Rogue have popped up over the past few weeks. First, we’ve got the classic core aggro package, designed simply to go face as fast as possible. The second is the water adaptation, which adds in the five core Murlocs listed above. The final is a slightly more midrange version, which adds in Murlocs, The Curator, and a beast. 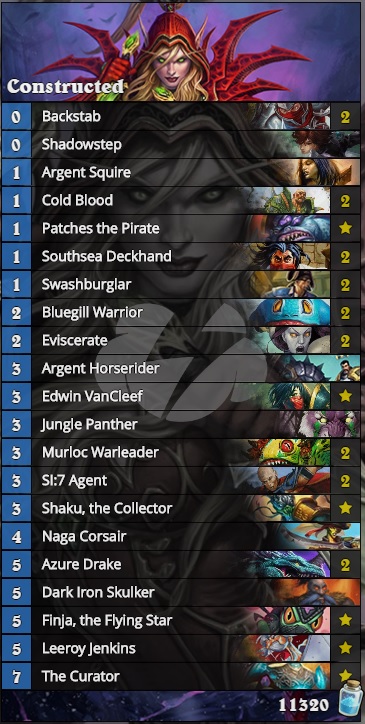 We’ve got two main variants for Water Rogue decks, one that includes The Curator, one without. Personally, I’ve been favoring the one with The Curator. It has a strong midrange feel to it, opening with bursty Pirates, curving into Murlocs, and ending with chargers and late game threats.

Tempo Storm has picked up on this list, and as of this week, has it ranked as the second best deck. There’s only one deck that Tempo Storm ranks higher, Pirate Warrior, and Reno Warlock rounds out tier one. We’ve included the Tempo Storm list here, but feel free to check it out further.

Why has Water Rogue appeared now, specifically? In all honesty, when the deck first showed up, it wasn’t amazing. It had a decent win rate against most decks, but lost spectacularly to Aggro Shaman. (Shocker there, right?) However, just after its creation, Blizzard rolled out a Hearthstone patch that nerfed Small-Time Buccaneer and Spirit Claws. As a result, Aggro Shaman got a lot worse. Water Rogue got slightly worse due to the Small-Time Buccaneer nerfs, but it wasn’t hit nearly as hard as Shaman.

With Water Rogue’s worst matchup out of the way, players were free to experiment with the deck. The result? Rogue shot from mid-tier three to tier one on Tempo Storm’s meta snapshot. After the patch, players were free to include The Curator in decks without being as afraid of dying before playing him. For an aggressive deck, Water Rogue has a ton of value cards, and Aggro Shaman’s diminished dominance has allowed players to explore (and exploit) them to their fullest potential.

We’ll have to keep an eye on not only Water Rogue, but all future water decks. Rogue is a very “swingy” class, and is often mischaracterized as an early game fighter. Hopefully this isn’t the case here, and we’ve discovered a new, interesting, top-tier deck. The Hearthstone community continues to innovate.

Aggro Shaman, you will not be missed. 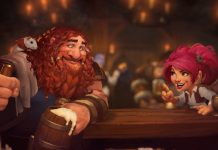