General Stephen Draper -
-6.8k
Path of Exile Shaping Before you start shaping your Path of Exile Atlas, we suggest you read our introduction to the Atlas. Once you have...
Symmetra Screenshot via playoverwatch.com

Alright, fans. You asked for it—nay, demanded it. And here it is. Symmetra has been almost completely redesigned from the ground up.

Since release, both the community and Blizzard’s developers have been unsatisfied with Symmetra’s design. Her ability to lend shields (bonus health that recovers over time) to teammates was seen as ineffective, and the placement of her sentry turrets suffered from a lengthy cooldown mechanic that made it feel more like a chore to optimize damage output than a tactical fortification. Players spent more time standing next to a wall, waiting for their turrets to come off of cooldown than they did taking part in the fight.

Likewise, problems were inherent to the manner in which her ultimate ability, a placed teleporter that allows her team to quickly enter a fight, was a high-priority target that Symmetra was generally unable to defend from intruders.

All in all, the hero had been relegated to the sidelines, useful only on specific portions of specific defense points. She felt less like the badass agent of the Vishkar Corporation, able to manifest nearly any device from advanced hardlight technology and her imagination, and more like a B-list benchwarmer in Overwatch’s cast of heroes.

A change was needed to keep the character relevant, and it came in the form of a near-total overhaul of her kit.

The most noticeable change is that the shield ability was replaced with a projectile barrier. Symmetra’s new toy is similar to Reinhardt’s shield, but advances forward of its own accord at a pace similar to most heroes’ running speed.

Symmetra is also now the very first hero in Overwatch with two ultimate abilities, being able to toggle between the standard teleporter, and a shield generator that grants a massive health boost to the team.

Reactions from the community have been most exclusively positive, as nearly everyone has been clamoring for a rework for several months now. Sombra fans are undoubtedly giggling maniacally with the introduction of the shield generators and the false sense of security they’ll no doubt exploit, while Reinhardt mains may be concerned that Symmetra’s shield wall will compete with their bread & butter ability.

It’s exciting to see the myriad and nuanced ways this massive change to the character will affect the game at large. I know I can’t wait to log on and inflict some sweet, sweet laser-y death myself. 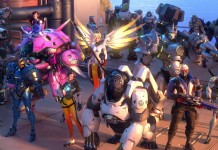