European faithfuls have been rewarded today as Origen took the series 3-1 against the Flash Wolves and proceed to the semifinals. At a surface level a 3-1 finish is a convincing series for OG but watching each match told quite a different story. In each match neither team displayed a concise plan of action that secured them their wins. Rather, they just farmed for as long as they could and hoped that when they clashed they would end up on top. Leading up to that clash the game was generally decided by whoever made less mistakes and with the shortest match being just over 40 minutes, there were more than enough time for mistakes.

Game one took a lengthy 45 minutes to complete and only 25 kills were earned from both teams combined, Soaz’s pentakill accounted for 1/5 of the overall kills. Even after securing a Baron and a pentakill, OG was unable to end the game.

With a final objective lead of four dragons and two barons to Flash Wolves’ two dragons, OG should have been able to secure a victory in a more efficient manner. Whether it was Maple on LeBlanc outplaying OG or bad positioning on part of the European players, Origen frequently found themselves having to back off of many engages. In fact, all of their kills came from five total engages over the course of the entire match. It wasn’t until FW made the tragic mistake of abandoning their Nexus entirely that OG was able to slip in and end the match.

Game 2 was a similar story as it dragged out to 40 minutes with less than five combined kills by the 28 minute mark. Finally, the first clash occurred resulting in a 1 for 4 victory and Baron in favor of the Flash Wolves.

FW were only able to secure one tower and one dragon for the entirety of the Baron buff duration. The rest of the game consisted of a series of clashes where each team crossed their fingers and hoped to come out on top. To end the game, OG won a final team fight followed by a push strait for the FW’s Nexus.

In game 3 we once again watched 40 minutes of farming and minimal engagements as the Flash Wolves played along with OG’s late-game, farm-focused style. This time the Flash Wolves ended up on top. Taking matters in their own hands, FW greatly reduced their room for error only giving OG four kills throughout the entire match (0.1 kills per minute for OG.) The first baron was engaged at 30 minutes and was secured by NL in an unorthodox fashion but secured nonetheless. Smart play and a hefty gold lead eventually earned Flash Wolves their first win of the series. It would seem that they finally have adapted to and outplayed OG’s own style of play until game four came around.

After losing, it seemed that Origen had got their act together. Fortunately for them, FW were more than willing to play to OG’s style as they battled yet again for another 40 minutes. This time is was Origen that reduced their misplays and errors. They gathered up their gold lead, secured their objectives, won their team fights, hit their power spikes and ended the match in their most convincing match of the series.

Origen’s path only gets harder from here. Going into the semifinals they will find themselves playing against either AHQ or SKT, both teams that won’t play to Origen’s slow paced style. Will Origen be able to adapt to their opponents if they cannot jurisdict the pace of the game? What happens if they cannot build their composition around hyper charging their ADC Niels? These are questions Origen needs to be asking themselves before next weekend. As for the Flash Wolves, this is the end of their Worlds journey and we hope to see them grow over the course of the regular season. 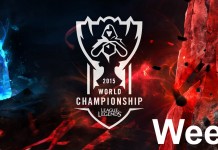 The State of Worlds - Week Two