The mandarins of League of Legends have been communicating their optimism for this year being the one that a North American team could win Worlds, vouching for Team SoloMid’s seemingly impenetrable roster. Many others, like Trevor “Quickshot” Henry allude to China’s possible first Worlds title, in reaction to the uncharacteristically embarrassing showing they had last year.

Flying under the radar once again is the Southeast Asian region of the LMS. Only 3 regions have ever taken a World Championship title, Europe claiming one worth only $50,000 USD, where the most popular highlight of the tournament was a player named after a graphics card saying “HotshotNidaleeGG“. Before the tempest of Korean dominance, Taiwan submitted a World Champion in the form of the Taipei Assassins.

They should have, by all means, been representing their region this year. Unfortunately, a complete implosion left the newly branded J Team in playoff shambles, despite not losing a single regular season series in the Summer Split.

In their place emerges the Flash Wolves as the regional champions. Last year, despite utilizing a meme of a top laner, the Wolves were able to make it into the quarterfinals of the World Championships. Nowadays, Yau “MMD” Li-Hung occupies the bruiser’s island. His mechanical precision combined with a relentless and disciplined work ethic have made him into a legitimate international threat to every other player in his position. Given the Wolves’ drawing into Group B with Cloud9, strength at this position could not be more important to match Jung “Impact” Eon-Yeong’s intimidating laning presence. At any rate, don’t be surprised when MMD’s Rumble burns unsuspecting opponents.

Rounding out their roster are four names that should be familiar to any fans of international League of Legends: Hung “Karsa” Hau-Hsuan, Huang “Maple” Yi-Tang, Hsiung “NL” Wen-An, and Hu “SwordArt” Shuo-Jie. One factor stands out in all of these players: clutch – but that’s something we’ll come back to later.

The pinnacle of Taiwanese League of Legends

The Flash Wolves absolutely dismantled J Team with a 3-0 sweep in the LMS finals, sporting an ironically China-esque playstyle. Though the LMS features a fairly standardized pick-ban phase, their seemingly meta macro gameplay veils an underpinned goal of fighting. Rarely will you see uncontested objectives drop in a Flash Wolves game; trading is never the ideal option for them. They group around important objectives like low-health turrets or Dragons in order to start a fight with a surprising flank from MMD or Maple.

That being said, they don’t have the same hesitation that Western teams display when assuming control of neutral objectives. If you aren’t there to contest Baron in time, Karsa has the confidence to immediately make the commencement call and subsequently win the smite battle. From the moment minions spawn, enemy teams need to be cognizant of the Wolves’ deliberately vast map movements with the intention of creating a pick.

J Team was perhaps the greatest victim of this, especially in the second and third games of their finals series, where their solo laners were consistently 4-man gang-banged without any calls for backup. Truly like wolves, they pounce on their prey as a pack, relentless in pursuit – chasing down the slightest scent of blood. Their hunger will inspire an unavoidable fear in even the most practiced of squads.

Perhaps more importantly, stars shine on the World stage. One might ask, “what value does a cliche as old as sport itself hold in an arena dictated by so much preparation and tactics?”

Frankly, we’ve seen it every single year. In season two, Toyz demonstrated his mastery of control mages en route to a championship win over Azubu Frost, which included dismantling tournament favorites Najin Sword and Moscow 5 during their Cinderella run. Season 3 was Faker’s coming out party, bailing his team out with Ahri charm after charm against OMG; at the same time, Uzi announced his place as the world’s best AD carry, single-handedly carrying Royal Club to the finals. Samsung White demonstrated in 2014 the magnitude of a 5-threat team which featured the most dominant duo-lane of all time of imp and Mata. Most recently, SKT re-established their dominance on the competitive LoL scene, with Faker once again leading the charge on his juggernaut Ryze.

The common factor for these players is an attraction to the limelight; they embrace it as an additional boost to their confidence.

Taiwan’s Flash Wolves is lucky enough to have 4 of these star-like players. Though they may fare moderately in some phases of the game, especially duo laning, all of their members are ready at any given moment to take over, with Karsa always giving extra muscle where needed. SwordArt has an impressive Thresh by any measurement, and NL is ready to pump out ridiculous damage the moment midgame strikes.

Most importantly, Maple is the quintessential contemporary LMS midlaner. He has spent the last year expanding his champion pool into the semi-control area, showing mastery through every single meta change. That being said, he truly dominates when wearing the guise of an assassin. His Leblanc will be feared even by, an albeit faltering, Faker, and at any moment his Zed could also emerge from the shadows. With a 7.7-3.4-5.1 average KDA on Leblanc over 142 games (62% winrate), Maple will be the threat at every single stage of the game.

Perhaps field experts are still hungover from the results of the Mid-Season Invitational. Wake up – that’s when CLG finished second place. We can hardly expect the same results to be replicated in Worlds, over a full season afterwards.

I won’t be surprised when Flash Wolves take the first seed in their group (and rightfully so), and I’ll be similarly composed when I see them go into overdrive come knockout time. Another Cinderella story from Taiwan is in the making; we’ve seen it all happen before.

So this time, don’t call it an upset. 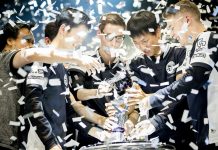