Dota 2 Craig Linscott -
-996
Silencer Here is a Hero that can silence entire stadiums of screaming fans. A fun trend that is going around in the larger LAN tournaments...
reddit user Veega

One thing Dota players like to lord over League is the relative difficultly of their game of choice. Dota has a punishing learning curve and it’s notoriously difficult to get started. The last hit/deny mechanic can take many hours to master, not to mention ever-changing item builds and ability tweaks.

The biggest complaint about the UI additions? “Muh skill cap.” Players don’t want anything making the game easier because they think it cheapens the experience. But as a person who works a full time job, writes for this website, and maintains a ‘household,’ it can be hard to find time to keep up with the multitude of balance changes. We’re up to 6.88f now, right?

Now, one could argue that down in my skill bracket (…) balance changes don’t make a huge difference, and they’d be correct. Still though, it’s a darn hassle to keep up with, even as a spectator. I can’t keep track of how long abilities stun for or how much damage they do for every hero, every patch.

The new crowd control bar? Handy, to an extent. Although having the text up there makes me think of Heroes of the Storm, especially ROOTED. It is definitely a bit of a crutch for lower skill players like myself. Same with the damage indicators. It’s a way to lower the hurdle for a casual player like me who might not play for several weeks and rejoin the game two sub-patches later.

Aui raised some good points in defense of the stun indicator.

But the biggest issue with Dota 2 UI changes might be the lack of numbers over the HP bar. Seems trifling, but many players used it as a visual clue to distinguish their hero. Valve decided Meepo wasn’t hard enough to play, apparently.

Having a toggle option for these changes isn’t going to work. If a percentage of players play without it, they’re putting themselves at a disadvantage whether they’d like to admit it or not. Maybe the best change would be to have it as an option in unranked only, so it can be more of a “training tool” to help players improve. Dota’s future is ensured only as long as people keep playing it, so maybe lowering the bar to entry is an OK idea. Ranked can remain as is for those players who measure their self worth by their MMR.

When in doubt, turn to Purge, keeper of knowledge.

For Spectators, maybe the UI changes will be helpful.

I’ve shown Dota matches to a few non-esports-watching friends. They have a really hard time following it. It’s fast-paced and there are a lot of colors and things on the screen. Having a big ol’ STUNNED makes it plain to new viewers what’s going on. Unfortunately, the current iteration of the STUNNED text obscures the player names. Having player names clearly visible is so important for new viewers. A lot of hero models can look kinda similar if you’re unfamiliar with them and they’re moving around the screen quickly. And if you want to talk about visual clutter, the new damage numbers add quite a lot of it.

since you all love some Arteezy salt:

Hopefully Valve will take all the feedback to heart and come up with a happy medium. Personally, I’d be happy if the changes were available in Bot matches or something, so I could practice timings with a visual cue.

Valve giveth, and Valve taketh away. 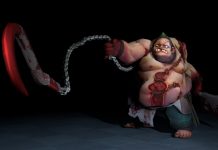